Services Activity Grows For First Time In Nearly A Year 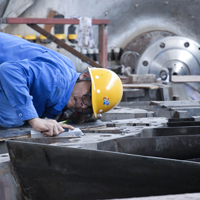 08 November, 2014
Print this article Font size -16+
Activity in India's huge services industry expanded for the first time in nearly a year in May, driven by a surge in new business, a survey showed on Wednesday (4 June).

The HSBC Services Purchasing Managers' Index, compiled by Markit, rose to 50.2 in May from 48.5 in April, the first rise above the 50 mark that divides growth from contraction since June last year.

A landslide win for Narendra Modi and his Bhartiya Janata Party (BJP) - which created India's first majority government in three decades - has fuelled expectations for key economic reforms after years of policy paralysis.

That optimism showed in the new business sub-index, which rose to 50.5 in May, also the highest since last June.

Inflation has eased this year. Reserve Bank of India Governor Raghuram Rajan opted to keep the central bank's key repo rate unchanged at 8 percent on Tuesday, as expected, after a series of rate rises.

Factory activity expanded at a slightly faster pace in May, while input prices rose at their slowest rate in over a year, a similar business survey showed on Monday (2 June).