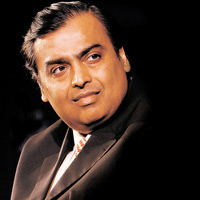 08 November, 2014
Print this article Font size -16+
Indian tycoon Mukesh Ambani hopes his multi-billion dollar bet on cheap high-speed wireless broadband could change the way nearly a billion of his countrymen use mobile devices from the way they do banking to watching cricket.

In a country where most people own a mobile phone yet lack basic internet access, it is a risky gamble even for India's richest man. He is counting on an unproven strategy and still-developing technology in a market with very little pricing power.

Three years ago energy conglomerate Reliance Industries Ltd (RIL) won an exclusive nationwide licence to roll out 4G across India, giving it a foothold to tap a potentially lucrative market in phones, tablets, computers and television.

The data-focused service could start to roll-out in New Delhi and Mumbai by the end of the year, sources familiar with the matter, who asked not be named, told Reuters. Eventually, the plan is to run it across hundreds of cities. Ambani has refused to divulge any specifics on the launch.

In what is one of the world's poorest countries, Ambani's 4G mantra is affordability. This has fuelled industry worries of a price war in a still-crowded telecoms sector that has recently started seeing stability after years of cut-throat competition and regulatory uncertainty.

Ambani's strategy is cut-price handsets and data, even if it means he has to subsidise the devices from his own cash pile. Fortunately, he has very deep pockets. Reliance's cash hoard of $15 billion stands in contrast to rival telecoms carriers who are estimated to have a combined debt load of $32 billion.

"Broadband and digital services will no longer be a luxury item - a scarce commodity - to be rationed amongst the privileged few," Ambani, the world's 22nd richest person according to Forbes magazine, told shareholders this month.

Ambani hopes to offer 4G devices costing less than Rs 5,000 ($90) and in talks with Samsung Electronics Co and others for sourcing handsets and other devices, one of the sources said. A spokeswoman at Samsung's local unit declined to comment.

While it appears to be a risky bet, the payoff for a successful venture is first-mover advantage in mobile data communications, which has transformed media, marketing and business strategies from Europe and the United States to China.

In a sign that its rollout is gaining pace, Ambani's Reliance Jio Infocomm unit this month signed a $2 billion telecom tower sharing deal with mobile carrier Reliance Communications, which is owned by his younger brother Anil. That followed an agreement with rival Bharti Airtel for leasing international bandwidth, and two other pacts.

India's cellular market is the world's second largest by users after China, with users surging from just over 5 million in 2002 to nearly 870 million now. However, less than 5 per cent of mobile phone owners use their device for high speed 3G data.

The uptake for 3G has been slower than expected since its launch in 2011 after costly airwave auctions, mainly due to the premium pricing of data services in a country where voice rates are less than 1 U.S. cent a minute, among the lowest anywhere.

Over the next five years as infrastructure is built, analysts predict India's rapidly growing middle class will buy between 30-80 million 4G connections.

Some investors, however, are worried Reliance may be taking too much of a gamble in its bid to diversify away from its oil and gas-related business which produces the bulk of its $70 billion in revenues.

They are also growing impatient over an outlay that has cost nearly $5 billion and counting, with no returns expected anytime soon.

Challenges Ahead
Serious technology challenges await Reliance. The company is using a version of 4G that is still evolving, and there are few compatible network devices and handsets now available. Bharti, which has 4G permits for some service areas, launched its first network more than a year ago, but is yet to start selling a handset that works on the technology.

The 2300 megahertz spectrum band India has allotted for 4G is less efficient than the 700 megahertz band widely used in the West. Apple Inc's iPhone and iPad and Samsung's popular Galaxy S4 are not tuned for RIL's spectrum.

The 700 band is currently allocated for state TV broadcasting services and security agencies, but the sector watchdog has recommended that the band be auctioned in 2014. Both bands need the same core infrastructure, making the switch from one to the other possible.

Ambani's telecoms ambitions have a familiar ring - a decade ago a phone company run by him sharply cut call prices and sold handsets for an initial payment of just $10. It transformed an industry that came to symbolise India's rampant economic growth.

His re-entry raises the possibility of another price war in a sector where carriers including Bharti and Vodafone have only recently started seeing price stability.

"It's a very competitive market, and Reliance looks to be very serious and aggressive," said Walter Rossini, a Milan-based fund manager at Aletti Gestielle SGR, which counts Reliance and Bharti among its Indian holdings.

But many question Reliance's dependence on a data-focused network in a market where voice generates nearly 85 per cent of carrier revenues.

"Though we think RIL's entry into the telecom space cannot be ignored, we believe that for RIL to pose any credible threat to incumbents, a strong comprehensive voice business is an imperative," Macquarie analysts wrote in a note on 7 June.

Reliance received a boost when India recently allowed 4G carriers to offer voice services by paying an extra fee. It is yet to decide whether to offer voice on its 4G airwaves using new technology or by tying up with an established voice carrier, a company source said.

Reliance did not reply to emailed questions seeking comments on its 4G plans.

While acknowledging scepticism towards his 4G venture, Ambani said at the shareholders meeting this month he was in the "optimistic minority" who held a bullish view of the sector.

Executives at rival carriers play down the Reliance threat. "For them it is everything starting from scratch and we have a very serious headstart in this business," said an official at a large rival telecoms carrier, declining to be named.