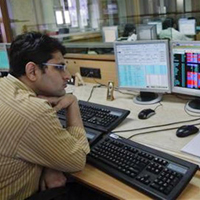 08 November, 2014
Print this article Font size -16+
The BSE benchmark Sensex today rose by over 290 points in early trade on emergence of buying by funds and retailers tracking a firming trend in the Asian region after US Federal Reserve chief Ben Bernanke said its huge stimulus programme would stay in place for some time.

Besides, further recovery in the rupee influenced the trading sentiment.

Brokers said the sentiment turned better on revival of buying by funds and retail investors triggered by a firming trend in the other Asian bourses after Bernanke said its stimulus drive would be kept in place for some time.

They said, further recovery in the rupee also buoyed the sentiment.

Meanwhile in Asia, Hong Kong's Hang Seng gained 1.31 per cent, while Japan's Nikkei was down by 0.91 per cent in early trade. The US Dow Jones Industrial Average ended a shade lower yesterday.