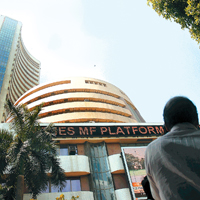 08 November, 2014
Print this article Font size -16+
The BSE Sensex ended higher for the fourth day in a row after weak GDP data raised hopes of some monetary easing at the next central bank meeting on December 18.
The Indian economy extended its long slump in the quarter ending in September with lower-than-expected growth at 5.3 per cent keeping it on track for its worst year in a decade.
Markets will closely track the vote on foreign investment in multi-brand retail in parliament and manufacturing PMI for November next week. Market participants say stocks may extend gains if the vote goes in favour of the government.
"It really depends on the Parliament vote now. If it goes through, there will be a boost to confidence. If it doesn't, it may indicate less aggression on reforms from the government," said Sonam Udasi, head of research at IDBI Capital.
The BSE Sensex ended 0.88 per cent, or 168.99 points higher at 19,339.90, its highest close since April 27, 2011, gaining 4.5 per cent for the week.
For the month BSE Sensex rose 4.51 per cent; Nifty added 4.63 per cent.
The 50-share NSE index gained 0.94 per cent, or 54.85 points, to 5,879.85, its highest close since April 21, 2011, also adding 4.5 per cent for the week.
Both the indexes have posted their best weekly gains since the week ending June 8 on rising expectations of reform and measures to contain India's twin deficit and FII inflow along with Moody's stable outlook on India and after Goldman Sachs upgraded Indian equities.
Andrew Swan, who manages about $3 billion as the head of Asian equities for BlackRock, told the Reuters Global Investment 2013 Outlook Summit on Friday that Indian politicians will push reforms and economic growth will tick up.
State Bank of India rose 1.8 per cent and Punjab National Bank gained 2.37 per cent after data showed farming output has grown 1.2 per cent in the September quarter, as both banks have substantial farm loan exposure.
Indian banks have seen a pick-up in demand for credit since the beginning of the festive season in October and are confident of meeting the central bank's projection for the fiscal year ending in March 2013.
ICICI Bank Ltd rose 1.67 per cent, while Union Bank <UNBK.NS> was up 3.74 per cent.
Recent underperformers, that missed the week's rally, gained on Friday. Shares of Oil and Natural Gas Corp (ONGC) rose 4.4 per cent, while capital goods major Bharat Heavy Electricals Ltd gained 5.5 per cent.
Shares in drugmaker Cipla rose 2.5 per cent after Cipla Medpro won a share in South Africa's $667 million contract, as it supplies the bulk of Cipla Medpro's drugs.
South Africa on Thursday awarded a $667 million contract to supply life-prolonging HIV medicine to 12 international and domestic firms, including Cipla Medpro, to deal with its biggest health problem.
Bharti Airtel Ltd shares rose 2 per cent.
Bharti Infratel Ltd, the telecommunications tower unit of Bharti Airtel is set to raise up to $825 million next month in what would be the country's biggest initial share offering in two years.
Shares in HCL Technologies Ltd rose 2.8 per cent after the company said it signed a five-year, multi-million dollar transformational engineering services agreement with Manitowoc Cranes.
However, among the stocks that fell, shares in Idea Cellular dropped 2.4 per cent on profit-taking after rising 16.12 per cent in November as of Thursday's close, versus a gain of 3.6 per cent in the NSE index.
Dealers say the reduction in regulatory uncertainty after lower-than-expected receipts in the 2G auction helped the stock gain in November but it is priced in.