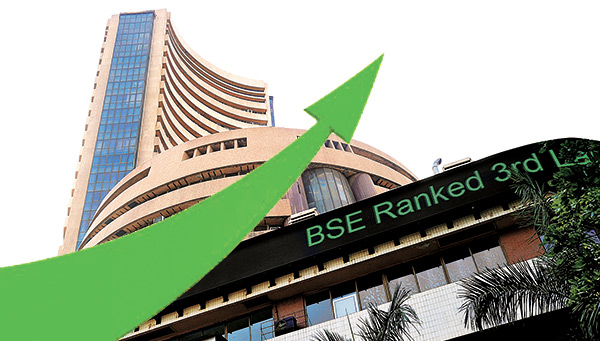 11 May, 2015
Print this article Font size -16+
Logging its biggest rise in over a month, the benchmark BSE Sensex on Friday (08 May) surged by 506 points to 27,105.39 points on government's move to mollify overseas investors' taxation worries and rupee's recovery.

"Sentiments got some support with Finance Minister Arun Jaitley announcing a high level committee, which will give its recommendations on the issue of imposition of MAT on foreign investors," Jayant Manglik, President of retail distribution at Religare Securities said.

Snapping three days of losses, the BSE Sensex resumed on a strong footing and quickly recaptured the crucial 27,000-mark to touch the day's high of 27,196.28.

The gauge had lost 891.48 points in the previous three days to hit 6-1/2 months low on persistent worries over MAT and delay in passage of key reforms bills in Parliament.

Tata Motors, topped the gainer list from the Sensex pack with a rise of 5.18 per cent after the company raised Rs 9,040.56 crore from its right issue.

Share of FMCG major Hindustan Unilever rose 3.34 per cent after it reported a 16.73 per cent increase in its standalone net profit at Rs 1,018.08 crore for the March quarter.

Bucking the trend, Hero MotoCorp was down 2.23 per cent after it reported a 14.05 per cent decline in its net profit.

Yesterday's battered banking stocks were in the limelight with ICICI Bank, HDFC Bank, Axis Bank and SBI adding about 180 points in total to the Sensex kitty.

Meanwhile, Foreign portfolio investors sold shares worth Rs 1,360.69 crore on Thursday (07 May), as per provisional data.

Overseas, Asian stocks closed mixed on signs of global bond markets stabilising after a big sell-off in the past few days.

Key indices in China, Hong Kong, Japan and Singpaore ended up by 0.45 to 2.28 per cent while indices in South Korea and Taiwan moved down between 0.12 and 0.26 per cent.

European markets were trading higher as key indices in France, Germany and the UK firmed up by 0.70 per cent to 0.82 per cent.

The market breadth turned positive as 1,871 stocks ended with gains, 823 stocks finished in the red, while 124 ruled steady.