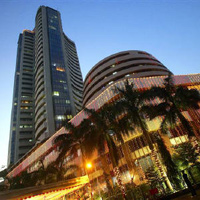 08 November, 2014
Print this article Font size -16+
The BSE Sensex snapped a four-session winning streak on Wednesday (21 May) as blue chips, including Larsen & Toubro Ltd, retreated from recent strong gains a day after foreign investors turned net sellers for the first time in about a month.

Investors took that milestone as an opportunity to take profits in recent outperformers, especially in domestic-oriented sectors that have led a powerful rally in anticipation of a victory for Bharatiya Janata Party and Narendra Modi, its candidate for prime minister.

"I do not think the market would take profit-taking or small sales by FIIs seriously. FII interest in India has increased considerably on hopes that policy bottlenecks would be removed soon," said Arun Gopalan, vice-president of research and fund manager at Systematix Shares.

The index still remains below the all-time high of 25,375.63 hit on Friday (16 May), when the BJP won a clear majority in the country's elections.

Domestic-oriented stocks fell after leading the recent rally on expectations that a Modi-led government would pass major reforms to revive an economy growing at its slowest in a decade.

Among capital goods makers, Larsen & Toubro declined 2.2 per cent after marking its highest in 6-1/2 years in the previous session, while Bharat Heavy Electricals lost 2.4 per cent.

UltraTech Cement slumped 3.2 per cent, while ACC fell 2.9 per cent.

The NSE bank sub-index fell 1.1 per cent, heading for a second day of falls on profit-taking after making a record closing high on Monday (19 May).

Sun Pharmaceutical Industries Ltd SUN.NS fell 1.8 per cent after the USFDA said on Tuesday that the drugmaker's response to a US import ban on one of its plants lacked "sufficient corrective actions."

But among the gainers, Bajaj Auto Ltd rose 5.1 per cent after the motorcycle maker's management issued a better-than-expected outlook in a conference call with analysts.