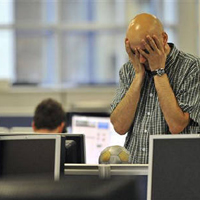 08 November, 2014
Print this article Font size -16+
The Sensex, Nifty and the rupee fell to multi-week lows on Tuesday while the benchmark bond yield hit a six-week high after the DMK pulled out of the ruling UPA coalition, putting in doubt the fate of the government's reform agenda.

Markets appeared to shrug off a decision by the Reserve Bank of India to cut the benchmark policy rate by 25 basis points and instead focused on its warning that the scope for further monetary easing was limited.

How foreign investors react to the political and economic uncertainties will be key, especially at a time when global markets are under pressure from concerns sparked by a radical bailout plan for Cyprus.

The BSE Sensex was down 1.1 per cent after earlier falling as much as 1.8 percent, the lowest since March 4.

The 10-year bond yield was trading at 7.90 per cent, after swinging between a 6-week high of 7.93 basis points to an earlier session low of 7.84 percent. The yield had closed at 7.88 percent on Monday.

"The political development in India has taken centre stage and will have a negative impact," said Sameer Rehman, vice president of fixed income origination and syndication at TD Securities in London.

The regional Dravida Munnetra Kazhagam (DMK) party withdrew from the ruling coalition in protest against the government's position on a United Nations resolution on war crimes carried out during Sri Lanka's civil war. That decision came at a time when markets were already flat to weaker after the RBI said "the headroom for further monetary easing remains quite limited" in its statement on Tuesday.

The words reinforced market expectations the RBI will only cut interest rates by a further 25 or 50 bps in the new fiscal year starting in April.

Investors had hoped a combination of fiscal and economic reforms from the government, along with aggressive central bank rate cuts, would boost an economy set to grow at a decade low of around 5 percent in the fiscal year ending on March.

These domestic concerns are coming at a time when investors are also growing concerned about foreign flows after Cyprus is keeping risk assets under pressure.

Foreign investors bought a net of around $31 billion in debt and FX markets last year, and around $12 billion so far this year, which were critical to help narrow down a deficit that is expected to widen to a record high in 2012/13.

"Because of the current account gap, we are reliant on flows. If the flows get truncated, it would be difficult. But I think it would be a knee-jerk reaction," said Sanjay Mathur, head of economics research, Asia-Pacific ex-Japan for RBS in Singapore.