Sensex Recovers 75 Pts Ahead Of The Union Budget 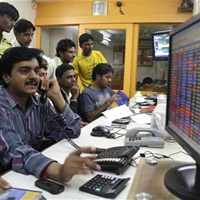 08 November, 2014
Print this article Font size -16+
Tracking a firming global trend, the benchmark BSE Sensex on Thursday rose by nearly 75 points in early trade ahead of the Union Budget 2014-15.

Sectoral indices led by capital goods, power, metal auto and PSU were trading in positive zone with gains up to 0.44 per cent.

Brokers said fresh positions built-up by cautious participants on expectations of some sops in the Union Budget 2014-15 to be announced later in the day buoyed the trading sentiment.

Besides, a firming trend in the Asian region, taking a strong lead from Wall Street, in response to an upbeat outlook for the US economy by the Federal Reserve influenced the sentiment, they said.

Among other Asian markets, Hong Kong's Hang Seng index was up by 0.45 per cent, while Japan's Nikkei index gained 0.10 per cent in early trade on Thursday. The US Dow Jones Industrial Average ended 0.47 per cent higher on Wednesday.