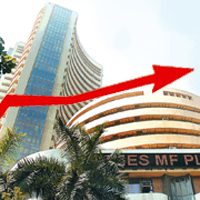 08 November, 2014
Print this article Font size -16+
The BSE Sensex retreated for a second straight session on Wednesday as drugmaker Lupin slumped after domestic revenue fell, while Tata Motors was hit after reporting a 23 per cent drop in quarterly profit.

Weaker Asian shares also weighed after the Chicago Federal Reserve Bank President, Charles Evans, said the US central bank could scale back bond buying later this year and, depending on data, could do so next month.

Stocks have fallen in 10 of the last 11 trading sessions, as investors turn wary of slowing growth and the rupee that tumbled to a record low on Tuesday despite the RBI's cash-draining measures.

"We need to see what sort of policy measures the government will take to build confidence around the currency at this point, and there's some nervousness in the market about that," said Neelesh Surana, equities head at Mirae Asset Management.

Drugmaker Lupin dropped 6.68 per cent after April-June domestic revenue fell 5 per cent from a year earlier, with sales slowing at home as well as in Japan.

Information technology companies fell as investors booked profits on recent gains from the weak rupee. HCL Technologies fell 4.01 per cent, while Tata Consultancy Services dropped 2.53 per cent and Infosys closed down 0.8 per cent.

However, recent heavy losers such as Yes Bank, Bharat Heavy Electricals and Coal India gained on value-buying by some investors.