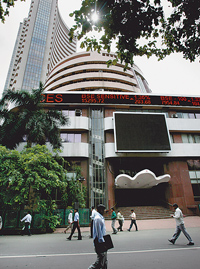 Brokers said sentiment was hit by reports of slowdown in the manufacturing sector.

According to an HSBC survey, the headline HSBC India Purchasing Managers' Index (PMI) -- a composite gauge designed to give a single-figure snapshot of manufacturing business conditions -- dropped from 52.4 in August to 51.0 in September, the slowest pace of growth since December, 2013.

Selling was seen across-the-board as 10 out of 12 sectoral indices closed in the red and only IT and teck indices finished in the green.

Shares of IT companies firmed up after Infosys announced that it is extending its relationship with Oracle to enhance support for a range of innovative solutions and services on new technology platforms.

IT stocks also got a boost from rupee falling to almost seven-month low of 61.94 against the dollar.

Infosys was the second top gainer in the Sensex pack with a gain of 2.66 per cent. Wipro was biggest gainer 3.22 per cent. TCS rose by 1.37 per cent. The BSE-IT index was the top gainer among sectoral indices with a rise of 1.94 per cent, followed by BSE-Teck 1.36 per cent.

THe BSE and NSE will now open for trading on Tuesday as a series of holiday fall on October 2, 3 and 6 on account of Mahatma Gandhi Jayanthi, Dussehra and Bakri Id. .

The total market breadth remained negative as 1,636 stocks closed in the red while 1,279 finished in the green.

Most Asian stocks ended lower after consumer confidence in the US unexpectedly declined and Hong Kong braced for bigger protests as Chinese holidays started.

Key benchmark indices in Japan, Singapore and South Korea fell by 0.39-1.41 per cent, while Taiwan's index firmed up by 0.26 per cent . Hong Kong market is closed today and tomorrow for holidays, while mainland China's markets are shut through October 7.

European stocks were trading mixed in their afternoon trade. Key indices in France and London fell by 0.24 per cent and 0.39 per cent while Germany's DAX was up by 0.15 per cent.