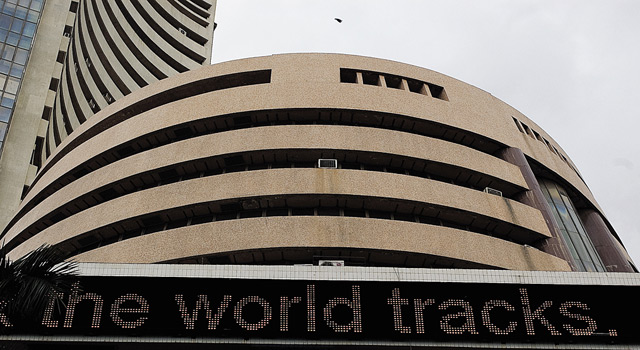 10 March, 2015
Print this article Font size -16+
Stock markets fell for the second straight session with the benchmark Sensex on Tuesday (10 March) sliding 134.91 points to one-month low of 28,709.87 as investors sold realty, power and oil&gas shares amid lingering worries over an earlier-than-expected hike in US interest rates.

After on Monday's (09 March) over 604-point crash, the 30-share BSE Sensex opened in positive terrain but soon succumbed to selling pressure. It touched day's low of 28,584.49.

As many as 20 out of 30 Sensex constituent stocks closed in the red, while 10 ended in the green.

Shares of telecom firms such as Airtel, Idea and RCom were in the limelight after analysts said bidding intensity in the ongoing spectrum auction has subsided.

Select stocks in auto space like M&M, Bajaj Auto and Hero Moto rose after car sales in India grew by 6.85 per cent in February. Also, industry body SIAM said it expects sales to be in positive with single-digit growth this fiscal.

The mood was cautious amid a persisting downward trend in global markets that negatively impacted domestic equities.


European were trading marginally lower in late morning deals as renewed concerns over the Greece weighed on the market sentiment. The CAC was trading lower by 0.25 pct, the DAX by 0.29 pct and the FTSE by 0.28 pct.

The investors wealth was eroded by over Rs 1.80 crore in two day's fall from Monday.

In the 30-share Sensex pack, 21 scrips ended with losses, while remaining 9 ended with good gain.