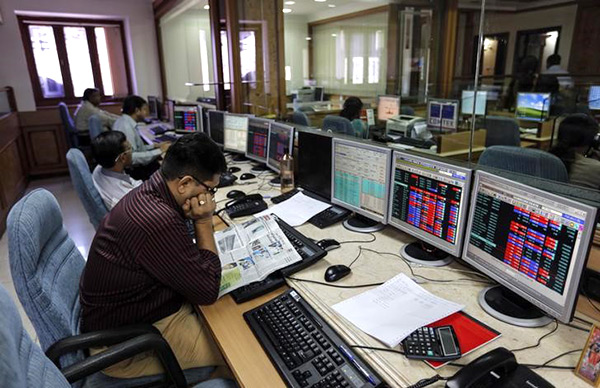 31 March, 2015
Print this article Font size -16+
The benchmark S&P BSE Sensex washed out all of its initial gains and even dropped by 69 points to log its more-than two-month closing low of 28,192.02 on weak European cues amid profit-booking by wary operators ahead of the expiry of derivatives contract on coming Thursday (26 March), extending losses for the straight fourth session.

Selling was seen mainly in select heavyweghts in IT, Tech, banking and consumer durable counters while small-cap and mid-cap counters also suffered with losses on profit booking by retail investors and their indices underperformed the sensex.

IT stocks dropped due mainly to rise in the rupee value against the US dollar.

According market participants, operators went on profit selling or rolling over their positions to next series and decided to play safe ahead of the expiry of March contract on coming Thursday (26 March).

The benchmark S&P BSE 30-share gauge resumed better and improved further to a high of 28,385.14 on firm Asian trends on the back of rally on Wall Street last weekend.

European markets were trading lower in their late morning deals ahead of German Chancellor Angela Merkel's meeting with debt-wracked Greek's Prime Minister Alexis Tsipras after weeks of bad feeling over Athens' debt woes. The CAC was down by 0.73 per cent and the DAX by 1.10 per cent while the FTSE was up by 0.70 per cent.

Back home, Foreign portfolio investors (FPIs) bought shares worth a net Rs 354.59 crore last Friday, as per provisional data by the Stock Exchanges.

Jignesh Chaudhary, Head Of Research, Veracity Broking Services said, "Today local Indian markets traded volatile for the day, to start the day indices opened in green and traded positively, but as the day progressed indices lost all its gain and eventually traded weak as the market failed to hold the gains and slipped down more to trade weak for the day". Also the Jindal Steel slipped down almost 15 per cent after the government rejected its bids for three coal mines which forced indices to trade low and eventually closed on a weak note, he added.

However, 18 scrips out of the 30-share sensex pack ended higher while remaining 12 finished lower.

Small-cap and Mid-cap indices also dropped by 1.29 per cent and 0.81 per cent respectively.

The total market breadth continued to remain weak as 1,971 stocks ended in red, 916 finished in green while 120 ruled steady.