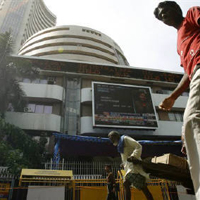 08 November, 2014
Print this article Font size -16+
The BSE Sensex and Nifty rallied to record highs, breaching the psychologically important 25,000 mark, while the rupee strengthened to near a 10-month high against the dollar, as early vote counts in the general elections showed the opposition Bharatiya Janata Party and its allies leading,
The BSE Sensex and the NSE Nifty soared to hit new all-time high of 25,014.85 and 7,459.40 points, respectively in opening trade on Friday (16 May), on sustained fund inflows after trends suggesting that Bharatiya Janata Party was leading in 150 out of 285 seats.

All the sectoral indices, led by banking and consumer durables, were trading in the positive territory with gains up to 8 per cent.

Brokers said continued buying by foreign funds as well as retail investors driven by reports that the BJP was leading in 150 out of 285 seats lifted the key indices to new highs.

Besides, appreciating rupee which soared to a fresh 10-month high of 58.88 against the US dollar also had a positive impact, they said.

Among the 30-Sensex stocks -- SBI, HDFC Bank and ICICI Bank were the top performers during the initial trade with the banking index leading among the 13 BSE sectoral indices. It was up by 7.78 per cent to 17,554.70.

BJP was making impressive gains in the Lok Sabha elections with the party leading in 150 out of 285 seats for which trends were available across the country.

The US Dow Jones Industrial Average closed 1.01 per cent lower in yesterday's trade.