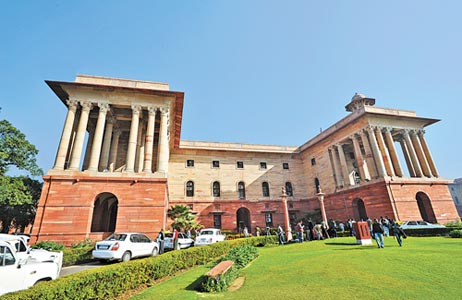 08 November, 2014
Print this article Font size -16+
The government — the finance ministry in particular — is caught between the proverbial rock and a hard place on disinvestment. The 2012-13 or FY13 Budget accounted for Rs 30,000 crore in capital receipts from divesting part of its stake in public sector undertakings (PSUs); half the financial year is almost over, and it hasn’t raised a single rupee through this avenue.

The heavy industries and steel ministries have objected to finance minister P. Chidambaram’s plan of going ahead with disinvestment in Bharat Heavy Electricals and the Steel Authority of India; they believe the fair value of these stocks will not be realised under the current market conditions.

Neither ministry wants to see a future report by the Comptroller and Auditor General accusing them of selling shares at less than their true value either. So what is the government to do? Stock market indices aren’t going to go higher anytime soon.

But the government’s finances are in dire straits; economic activity and growth continue to slow, and the prospects of a revival are likely to get brighter in the middle of the next financial year. While markets already expect the government to exceed its budgeted borrowing programme by a little, much-bigger-than-anticipated borrowing could have potentially grave risks.

The first would lead to a crowding out of private sector borrowing; true, firms have not been making any big capital expenditure plans, but small and medium enterprises that rely on the banking system for their finances will be hit. That will dent already shaky sentiment even more.

The second risk is more serious: a possible downgrade by the international rating agencies. Already, our investment grade status is threatened by our inability to pass pending and important legislation as government and the political Opposition are deadlocked on the floor of Parliament. The monsoon session is almost over, and no business was done.

Even a partially successful disinvestment programme won’t make the government’s fortunes; but being unable to complete one could break it.