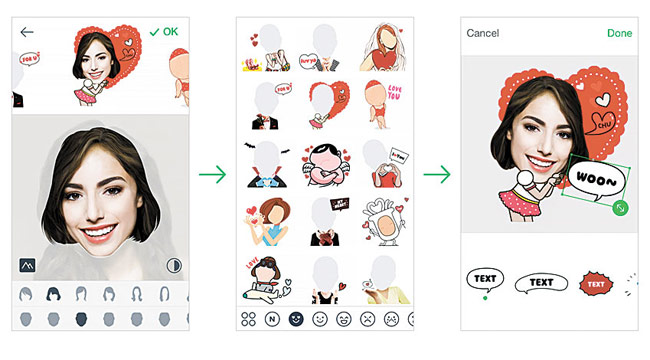 31 March, 2015
Print this article Font size -16+
Instant mobile messaging platform LINE has launched a sticker app ‘ycon’ to establish itself in a market that continues to be intrigued by digital emoticons. It is an updated version of the LINE Selfie Sticker app that will blend better with LINE.
Through the application, LINE seeks to go a step further in the personalisation and customisation attributes of mobile applications. The ycon app allows users to insert selfies into the ready templates designed by LINE and create new stickers. Users can also adjust the brightness, size and saturation of the stickers.
The ycon app creates the selfie sticker with a transparent background and it works just like any other LINE sticker that users can send via the LINE chat application without accessing the ycon app, which will make the sticker experience seamless and hassle free.
“The Selfie Sticker Creation App ycon is an interesting way to use one’s self-portrait in the digital age. All one has to do is click a picture and convert it into a customised sticker. This gives a personalised feel to conversations and is a new benchmark by LINE in developing creative ways of communication,” says Daman Soni, business head , India, at LINE + Corp.
“Selfies have become the best medium of self-expression and creating stickers using selfies will make conversations even more engaging,” he adds.
Besides English, the app will also support languages such as Arabic, Chinese, French, German, Russian and Spanish. The application is compatible with both Android and iOS devices.

In The Big League
Pinterest has moved to a double-digit valuation, at $11 billion following a $367 million fund infusion. The social bookmarking site declined to share the name of the investor. Existing investors of Pinterest include Rakuten, Andreessen Horowitz, Valiant Capital Partners and Bessemer Venture Partners.
In a regulatory filing with the Securities and Exchange Commission, the five-year-old company said the funding was involved equity and 15 investors —  existing and new.
Social Shopping
According to a study by Trueship, 75 per cent of Twitter users make at least one purchase a month, which is higher than the 67 per cent of Internet users overall. About 74 per cent shoppers rely on social media to get more information or reviews of products they want to buy. It is expected that 5 per cent of overall ecommerce sales will come from social networks in 2015.
Democrats On Top
An interesting finding from Social Habits shows that 40 per cent of Twitter users are Democrats, compared to 30 per cent of the US population overall. The percentage of Republicans and Independents on Twitter almost mirrors the US average.
(This story was published in BW | Businessworld Issue Dated 20-03-2015)
Tags assigned to this article:
magazine social media pinterest line magazine 20 april 2015 ycon doubledigit