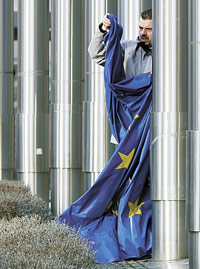 08 November, 2014
Print this article Font size -16+
To find a common language if its unemployed are to be able to move and find jobs in more prosperous regions like Germany Bank failures carry macroeconomic risks. Some banks have grown to a size where their failure makes rescue by the government inevitable, and the cost of the rescue is largely borne by the taxpayer. The Indian taxpayer has no choice; since the bulk of the banking system is owned by the government, a failure in any part of it is bound to be paid out of the taxpayer’s pocket. India’s biggest bank is showing signs of structural frailty; if it gets into trouble, its depositors, who have lent it almost a quarter of their deposits, would have a liquidity problem. But they can rest assured that their travails would be transient; sooner or later they would be baled out by the government. The taxpayer can equally rest assured that he will bear the cost.

Most banks in capitalist countries are, however, privately owned; whilst the failure of a systemically important bank will bring in the government as liquidator, the governments try to ensure that the costs of banks’ failure are borne by its owners. The task is particularly fraught in the European Union, where banks are still regulated by national governments and central supervision is under construction. As part of the construction project, the European Commission appointed an expert group under the chairmanship of the governor of the Bank of Finland, Erkki Liikanen. It talked to banks, their customers, equity holders, policy makers and academics; it held consultations and published their proceedings. It then sat down and wrote its recommendations, which are remarkably free of dogma.

Its major recommendation is something that is generally accepted now, namely that banks must separate their deposit-taking from more speculative activities; the only risky activity that can go with deposit-taking is hedging risks. There may be some conceptual problems in implementing this rule. Some of a bank’s speculation may be on customers’ account, for instance. The group only expects speculation to be hived off into a separate company; it does not expect the company to have separate customers. A depositor who wants to speculate will still be able to walk to another branch next door, and bet to his heart’s content.

If separated, a bank’s speculative arm will have to have its own capital and risk management. The normal rule in liquidation is that secured creditors are paid off first, unsecured creditors next and shareholders come last. The group envisages a more elaborate hierarchy; it speaks of in-bailable debt, which would be debt but at risk just like equity. This is a tantalising idea; there is much to be said for it. But it needs to be elaborated — for instance, should there be layers of in-bailable debt that can be drawn upon successively? It is a pity that the group did not give it more thought.

The group also envisages more realistic and empirically sound risk weights for capital. The Bank for International Settlements has been working on this for decades and producing an unending series of Basel I, II, III, etc. It is a worthy endeavor, but its conceptual basis is shaky. If the most serious risks are systemic, it is not possible to attach a fixed number representing risk to each asset; a perfectly safe asset may become risky in the hands of a fragile or incompetent bank.

Of the two types of a bank’s assets, advances are considered safer than derivatives and other market-related assets. But marketability is supposed to reduce risk; a bank with sticky assets will find it impossible to liquidate them. The belief that advances are safer rests on the assumption that a banker will choose sound, respectable borrowers. But their soundness does not depend on their business model and balance sheets alone; the best of businesses can go under in a general downturn. Risk-weighted capital and liquidity ratios are good management practices in a cash-driven business. But there are no microeconomic solutions for macroeconomic problems.

Government must step in when the entire economy gets into trouble; and as Greece shows, even a government may be incapable of resolving a crisis if it is left with as few policy instruments as the European Union does. It is irreligious in Europe to ask whether the EU is a good idea. But those countries that are out of it need seriously to ponder over the advantages of economic union. No one would question the wisdom of the economic union that is the United States; but that is because if a part of it sinks, its people can move to other parts, since all of them speak variants of American English. Maybe the Europeans should find a common tongue — for example, Greek, their most ancient language.