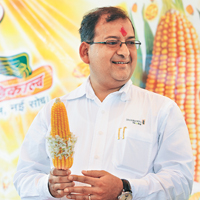 At stake is not only the seed market but also the Rs 800-1,000 crore seed replacement market, which is growing at 10-15 per cent (kharif and rabi season). This market is expected to boom in the coming years. "This is bound to go up in India as we are far behind the US, where seed replacement is 90 per cent," says Ramesh Chand, director, National Centre for Agricultural Economics Policy.

As the companies arm themselves for the battle to control ‘seed', they are sharpening their research and development (R&D) efforts. An estimated $2-5 billion is likely to be invested in seed development infrastructure in India. Companies are planning to spend $400-500 million on soil survey and for local human resource deployment (that is, agents in villages) and another $10-12 million annually for promotion of seeds in India.

Made By India
R&D is undoubtedly the key to winning the seed war and the MNCs know this fully well. "There is a need to develop ‘Made by India' seeds and not ‘Made in India' seeds. The company — MNC or Indian — that makes ‘Made by India' seeds will rule the market," says K.C. Bansal, coordinator, ICAR (Indian Council for Agriculture Research) Network on Transgenic Development, National Research Centre on Plant Biotechnology, ICAR, New Delhi.

‘Made by India' seeds are produced in India and are best suited to Indian soil conditions, while being resistant to pests and viruses. In contrast, ‘made in India' seeds are made from imported germ plasm and are less resistant to pests. Strengthening the R&D in India also has cost advantages. "The cost of developing a seed in India is about 30 per cent less," says a senior scientist at the ICAR, who has been hired by a seed MNC, which plans to set up an R&D unit for rice at Karnal in Haryana.

According to industry sources, Monsanto will invest $8-10 billion over the next decade globally, including in India, in seeds and trials. The company will develop vegetable, corn, sugarcane, potato and oil seeds at its facilities in Hyderabad and Bangalore. It will be supported by its seed research breeding stations in Abohar (Punjab), Aurangabad, Bangalore, Dharwad, Ghaziabad and Kallakal (Andhra Pradesh); seed processing facilities in Bellary (Karnataka), Hyderabad and Eluru (Andhra Pradesh); a Quality Assurance Laboratory in Hyderabad, and a chemistry plant in Silvassa (Dadra and Nagar Haveli). "We offer a holistic approach to seed in India and we have excelled globally to prove that," says Amitabh Jaipuria, managing director of Monsanto India.

break-page-break
Giving Monsanto stiff competition in India is DuPont, another US company. Agriculture accounts for 30 per cent of DuPont's business of $500 million in India, split equally between seeds and crop protection. "It is the agriculture sector that has helped us deliver growth even during the economic downturn," says Balvinder Singh Kalsi, president, South Asia at DuPont. The company has set up a seed development facility in Hyderabad as part of its $100-million reinvestment plan. "Investment in research for seed and plant protection is the key to our business in India," says Kalsi. DuPont has set up the DuPont Knowledge Centre (DKC) at Hyderabad with an initial investment of Rs 100 crore. An equal amount is invested every year as recurring maintenance cost. Biotech research at DKC is focused on global programmes of trait development for drought-resistance, nitrogenuse efficiency and yield improvement. Further, "India is the global hub of hybrid rice research and we have just set up a new field R&D centre for corn in Bangalore," says Kalsi.

Indian seed firms are also strengthening their R&D, primarily through acquisitions. Hyderabad-based Advanta Seeds acquired US-based Crosbyton Seed Company for $13 billion last year. Ram Kaundinya, CEO of Advanta Seeds and chairman of the Association of Biotech Led Enterprises-Agriculture Group (ABLE-AG), says: "Consolidation will happen to capture the Indian seed market quickly." With the acquisition, Advanta has an agri-biotech R&D unit that can match the R&D units of DuPont and Monsanto. "You need huge investment and patience since it takes more than 10-15 years to develop a trait. Unfortunately, neither the government nor the public sector companies in India are willing to do it," says Shantu Shantaram, executive director of ABLE-AG.

New Strategies
The competition is palpable. While cotton is the stronghold of Monsanto with a 65 per cent market share across the country especially in Punjab, Maharashtra and Karnataka, DuPont in India has been steadily expanding its footprint in corn, rice, pearl millet, sunflower and mustard over the past decade. It also has plans to give Monsanto competition in the cotton sector. In 2009, it acquired Nandi Seeds and Nagarjuna Seeds.

For Monsanto, the next big thing is the vegetable seed business. "It is an exciting area and we already have a number of pilot projects for various vegetables in India," says Jaipuria.

However, vegetable seed has an aggressive market. Distribution and marketing is very critical. "The Indian farmer, like any global farmer, is smart and he understands the importance of extension work that seed companies undertake," says Akshaya Kamath, former head of South Asia at Syngenta, the Switzerland-headquartered company with a focus on hybrid seeds and crop protection products in India.

Extension work is carried out by all seed MNCs. Their local executives use tools and goodies for promotion. "We are aware that for a farmer, seeing is believing and he will continue to look for new seeds and methods of cultivation," says Jagresh Rana, director, Mahyco-Monsanto Biotech. The company helps Indian farmers connect with the global market to get a better price for their cotton produce. Steps such as these ensure that farmers purchase seeds only from that company. "I do not see anything wrong with that," says Ajay Jakhar, chairman of the Bharat Krishak Samaj, a farmers' forum in India, which claims to have helped marginal farmers in Punjab triple their yields, using seeds from MNCs, especially cotton seeds.

Distribution Holds The Key
Marketing and distribution are key factors in the seed sector. Companies offer 30-45 per cent margin to seed retailers. Besides, dealers and distributors are also offered volume discounts at the end of the season (if they meet their sales target), in addition to the special incentives.

Undoubtedly, MNCs with deep pockets have an edge in marketing and distribution. While the companies are not forthcoming about their marketing budgets, industry insiders say it is around Rs 200 crore annually. Of this, about Rs 100 crore is spent on print and hoarding advertisements, and the rest on special promotions in villages including providing shopkeepers and extension service executives with uniforms with the company's logo.

As the battle to capture the seed market becomes a war, it will have a positive effect on the food production in the country, too. Hopefully.