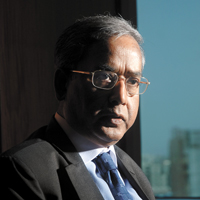 08 November, 2014
Print this article Font size -16+
Worried over delays in prosecution of those found to be involved in frauds and other offences, market watchdog Sebi has asked the government to set up special courts to fast-track the process of bringing the guilty to book.

Expressing concern over some cases continuing for years, Sebi Chairman U K Sinha told PTI that there was a need for special courts to expedite the process and the regulator has asked the government to facilitate the same.

Asked about the cases like the one against Rajat Gupta in the US where the Indian-origin banker is facing a possible jail term for many years, Sinha said in an interview that legal provisions in India and the US are entirely different.

"In the US system, the investigators have got more powers and secondly it can lead to prosecution and actual criminal punishment. In our system, the emphasis is more on penalty and now the penalty is much higher in cases like insider trading than what it used to be earlier.

"But people start comparing that people in such and such case somebody in the US has been given a jail sentence," the Sebi (Securities and Exchange Board of India) chief said.

Sinha said that there is a provision for prosecution as well in India, in addition to penalties.

"But our prosecution is not succeeding to that level. I admit that. In some cases, where we have tried prosecution, we have found that the prosecution has been going on for years and years together.

"Primarily, that is because we do not have earmarked judges. If we want our prosecutions to succeed, we need earmarked judges. We need special courts. If that happens, there will be a marked improvement on this front," he said.

Asked whether he would ask the government to make provisions for special courts to handle market-related cases, Sinha said: "We have done that. We do not keep things pending here. We take up the matter at the earliest occasion."

In India, there is a provision for setting up special courts to deal with certain class of offences under the Special Courts Act of 1979. There are special courts for corruption and other cases, including those handled by CBI.

The Supreme Court has also said the government should constitute more designated courts to dispense with the cases expeditiously. The government in 1992 had enacted the Special Court (Trial of Offences relating to Transactions in Securities) Act after the Harshad Mehta scam.

Talking about cases like insider trading and comparisons with the US on this front, the Sebi Chairman said that investigation tools available with those in the US are also much more different.

Sinha said Sebi has asked the government to provide it access to call data records of those suspected to have violated insider trading and other norms in the securities market, to strengthen its investigation process.

"On the issue of tools for investigations, the case that you have cited, you know the methods that were used to crack that case," Sinha said, referring to the phone call records of people in the insider trading case involving Rajat Gupta.

"But, here we do not have access to the transcript of any communication between two persons. But what we are asking for is one step before that.

"We are not getting even the call data records to establish that two persons have been talking to each other frequently and they are working together in insider trading cases.

"We have made a request to the government and they have assured us about it. We are hoping that it will happen soon, but so far it has not happened," Sinha said.