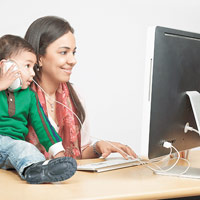 08 November, 2014
Print this article Font size -16+
It’s probably an open secret that 30 per cent of online customers for innerwear brand Victoria’s Secret are men -– before you let your mind wander, let’s give them the benefit of doubt that most men are buying it for their wives or partners rather than for personal use.

But the brand has many more secrets to reveal. A recent study by Google India called the Women & Web Study unveils that Victoria’s Secret happens to be the third most searched International brand in India by women, much more than Louis Vuitton and Swarovski and only next to Zara and Ray Ban. As Google India head Rajan Anandan points out, Victoria’s Secret stands out because that’s the only brand that’s not yet sold in India through an official channel.

That online behaviour reflects their offline lifestyle is a no-brainer. The choice of these international brands also reflects the aspirational levels of Indian women consumers. And a lot of them are online. According to estimates by Comscore, as of May 2013 of the 150 million Indian consumers online, 60 million of them were women (of which 24 million women go online everyday). A huge 75 per cent of them fall in the age group of 15-34 making them a target audience with huge potential for marketers. Another estimate by TGI in 2013 indicated that nearly 75 per cent of all affluent women in India are online. They spend an average of 50 minutes online every day and the top five categories that they are searching for includes apparel and accessories, food and drink, baby care, hair care and skin care.

Most women are also consuming their daily dose of entertainment through the internet. Google points out that 40 per cent of YouTube users are women and they consume everything from television shows to music videos or catch up on celebrity gossip online.

However, when it comes to shopping online only 8 per cent of the 60 million Indian women transact online on a regular basis, showing that the online medium is possibly used only to gather information before women go out and shop from a brick-and-mortar store.  However the digital medium makes a huge influence on purchase behaviour – as high as 72 per cent in categories like skin care or cosmetics.

What’s giving an added impetus that women are going to spend more time online in the days to come is that one in four searches are happening through the mobile phones. With bandwidth set to improve in the coming days internet usage on the mobile is only going to go up further.