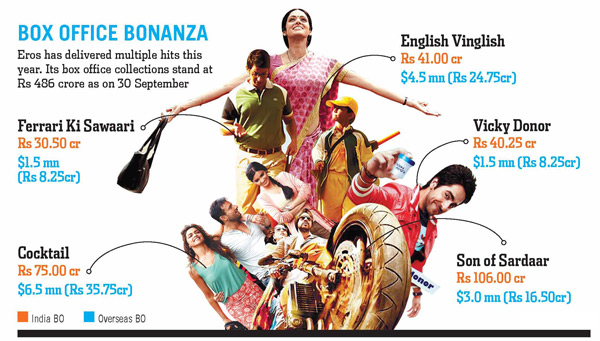 08 November, 2014
Print this article Font size -16+
In 2005, when Kishore Lulla, the London-based executive chairman of Eros International, was preparing to enter the Indian market as a producer, he received an important visitor. Leo J. Hindery, managing partner of Intermedia and frontman for the powerful John C. Malone, chairman of the cable and media giant Tele-Communications (TCI), dropped by demanding a piece of the action. In true American, cowboy style, Hindery whipped out his cheque book. “How much will it be for 51 per cent of Eros?” he drawled.

Lulla told Hindery that Eros was not up for sale. The Eros executive needed funds for expansion, but he held on. By July 2006, Eros became the first Indian media company to go to the Alternative Investment Market (AIM) of the London Stock Exchange, and raised $100 million or around Rs 400 crore. The infusion helped Eros enter India with its first film — Omkara, which became a hit. “The AIM public issue helped us generate cash flows of $750 million, including a borrowing of $150 million at Libor rates,” says Jyoti Deshpande, managing director and CEO of Eros. The company, with its war chest full, was all set to enter the big league.

The Studio Model
A study of Eros’s business model in the last couple of years will show that it produced and acquired a large number of films for release, mixing the mass-appeal, star-cast films, with the more creative, small-budget films. Eros’s strategy also went beyond Bollywood, and included a large number of regional, non-Hindi films in its release slate. Of the 77 films it released in FY12, 27 were Bollywood productions; the remaining 50 were a mix of Tamil, Punjabi, Marathi and other regional languages.

After a not-so-good 2010, calendar 2011 brought relief to the industry with as many as 10 big hits from Bollywood. Of these, four were from Eros — Ra.One, Ready, Zindagi Na Milegi Dobara and Rockstar. Ra.One and Ready surpassed the Rs 100-crore mark in gross box office revenues. On the back of these hits, Eros’s revenues for FY12 grew 35 per cent to Rs 963 crore from the previous year’s Rs 716 crore, while profit after tax (PAT) rose 26.5 per cent to Rs 148 crore from the earlier Rs 117 crore.

This year, too, Eros has been on a roll with multiple Bollywood hits — Vicky Donor, Ferrari Ki Sawaari, Cocktail and English Vinglish. Having generated Rs 486 crore till 30 September, it is targeting Rs 1,200 crore in revenues in FY13.

Underlying the successful scaling up by Eros is its adoption of the studio model. This entails making a few movies, but relying mainly on acquisitions and co-productions for scale. Elucidating the strategy, Deshpande says: “We invest in content and distribution through as many pipelines as possible. We work with talented people who make the films, rather than getting into the nitty-gritty of film-making. If we did that, we would release very few films.” Says analyst Nitin Daga of Microsec Research: “Eros’s business model enables it to monetise films from pre-sale to post-theatrical stages. Its strong content library is monetised effectively through a strong distribution network and new business initiatives.”

Eros has also recently launched the subscriber service ‘Eros Now’ at $5.99 a month, allowing one to download and watch both latest releases as well as library classics on an iPad or any other Net-enabled device. “We are generating $50 million a year from digital sales; and this goes straight to our bottom line,” reveals Deshpande.

From London To Mumbai
The movie distribution business was started by Kishore Lulla’s father Arjun Lulla in 1977. Then, in 1988, Eros was set up as an international distribution house by the Lullas in London. Eros did not operate in India and focused on acquiring the international rights of movies for overseas distribution. At a time when the overseas box office for Indian movies was insignificant, the rights were acquired cheap, and Eros held a near-monopoly over international distribution. In the process, it also acquired domestic rights, and now owns a library of nearly 1,900 films and another 700 for which it has only digital rights.

However, even as overseas box office and digital revenues expanded over the past 20 years, Indian films have not made a breakthrough to non-émigré, crossover audiences. To scale up, the Lullas returned to India, both as producers of movies and domestic distributors. To add heft to its Indian operations, Eros acquired a 51 per cent interest in July 2007 in Ayngaran International, a leader in Tamil film content and distribution, for Rs 160 crore ($33 million). In 2010, Eros followed up with an IPO, raising Rs 350 crore. “Today, our India and overseas revenues are a 70:30 ratio,” says Lulla.

Everything has not gone according to the script though. As a diversification move and an entry point into India, Lulla, in partnership with diamond exporter Bharat Shah, steel magnate L.N. Mittal and others launched the B4U TV network in 1999 with plans to introduce a slew of channels offering Hindi entertainment, movies and music. It did not succeed and was choked by a string of controversies. “It taught us not to make business alliances with individuals,” rues Lulla, an obvious reference to Bharat Shah.

Now: Premium Channels
The B4U failure has not prevented Lulla from making another bid for television eyeballs. In recent days, Eros International and HBO have announced the launch of two free-of-ads premium channels. The 50:50 partnership will put on air, next March, two HBO-branded channels offering subscribers exclusive movies in high definition (HD) at Rs 100 per month.

The announcement of the new venture comes close on the heels of the successful rollout of digitisation of cable television in the four metros. Digitisation will allow content providers to harvest subscription revenue better and differentiate and target niche audiences for premium, more expensive content. Eros and HBO are targeting movie buffs who are fed up with five-hour, ad-ridden movies. “We wanted to be the first movers,” says Lulla. “By 2016, we may have as many as 8-10 movie channels on air,” he adds.

Lulla is expecting 10-20 million homes to subscribe to the premium services. At Rs 100 per subscriber, HBO and Eros expect to earn Rs 20 each after paying for distribution and other services, a possible take-home of Rs 400 crore a year for each of the partners. “This will ramp us up to Rs 2,000 crore a year, double our current revenues,” says Lulla.

For Eros, there is a lot at stake in the success of these exclusive channels. Says Lulla: “The growth of the film industry is linked to overall growth; not just the growth of the box office.”