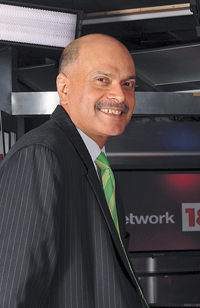 
Network18's first round in film-making was not a success story, and was certainly overshadowed by the much better performance in news and entertainment television. Bahl promoted and listed The Indian Film Company (TIFC) on the London Stock Exchange's Alternative Investment Market (AIM) and raised £53 million (about Rs 400 crore) in 2007. The company, through its Indian arm — Studio18 — produced and distributed nearly 20 movies over two years' many of which were hits like Jab We Met, Singh is Kinng and Ghajini.

However, financial stock-taking showed TIFC had a rough ride. By January 2009, two London-based minority shareholders — the Altima India Master Fund and Kelusa Master Fund — called for an extraordinary general meeting for the ouster of Network18 directors Bahl and Amit Varma. In the first 18 months of operations, TIFC made a net profit of just £3.4 million on initial equity capital of £53 million, while the share-price had nose-dived to one-fourth of the listing price of 25 pence, they said.

Network18 managed a compromise with the rebels, but the company reported a net loss of £4.56 million for FY2010, compared to a net profit of £3.89 million for the previous year. Film releases and operations for TIFC and Studio18 virtually came to a standstill in 2010, and company CEO Sandeep Bhargava and much of his staff quit. "The whole industry went through a bubble. Stars were too expensive, and films were outpricing themselves," says Chawla.

It was in these circumstances that Viacom18 acquired 94 per cent of the Indian Film Company (TIFC) stock in October last year at £50 million and went on to de-list the company from AIM. Chawla says the acquisition of TIFC was part of the group's strategy to bring mass entertainment — television and films — under the single roof of Viacom18 that also houses good performers like the Colors channel.

On the learning for Viacom18 Motion Pictures, Chawla says: "The new approach is for a closer alignment of creative talent with the marketing of movies. We intend to get the product right, and to make more youth movies."