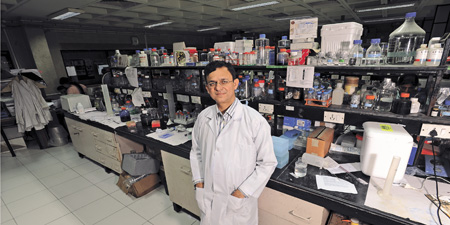 08 November, 2014
Print this article Font size -16+
The awards are announced just like the Nobel Prize. The recipients get a phone call in the morning and are congratulated by the jury. A few hours later, their names are announced to the public through a press conference. The Infosys Science Prize, now in its second year, carries an incredulously high cash prize of Rs 50 lakh. "Some of my friends told me that this can't be true," says Ashutosh Sharma, a professor of chemical engineering at IIT Kanpur and one of the recipients this year. The prize also joins a growing list of monetary incentives for doing world-class research in India.

The highest government award for science in India is the India Science Prize instituted a few years ago. This award, which carries a cash prize of Rs 25 lakh, is given for life-time achievement, usually to those who are well into retirement. Only two scientists have won the award so far: chemist C.N.R. Rao and statistician C.R. Rao. The Infosys Prize, on the other hand, is given to those under 50 years of age, and is also considered as a reward as well as a stimulus for future work. "We wanted to motivate young people to take up science as a career," says N.R. Narayana Murthy, trustee, Infosys Science Foundation.

Ambitious governments all over the world have been trying to attract the most resourceful scientists to their countries. South Korea and China have been at the forefront of this drive. They do their best to attract the best talent within their country to do science research. "China pays scientists whatever they ask," says Inder Verma, professor at the Salk Institute for Biological Studies in California. "India is well behind in these efforts, but the situation is improving." China also has exceptionally high rewards for scientific achievement in the country, while India is slowly beginning to catch up, with the private sector also pitching in.

In the past two years, the government has instituted several fellowships to encourage those who do outstanding research. The Ramanujan Fellowship provides Rs 75,000 a month — in addition to the salary — to outstanding researchers who return to India from abroad. The JC Bose Fellowship gives an extra Rs 25,000 a month and other generous grants for five years.
All scientists who win a Shanti Swarup Bhatnagar Prize for Science and Technology are now given an additional Rs 15,000 a month. The Council of Scientific and Industrial Research can now pay outstanding researchers salaries equivalent to that of a director. The Infosys Prize is like an icing on a small cake — telling the public that good science can be rewarding. It also tells the Indian society, in between the lines, that world-class research in India is still a rare phenomenon. "We were clear that we wanted to reward world-class research in India and not the best research in India," says Murthy.

The Best Brains
The winners of the prize were the following: Sandip Trivedi of the Tata Institute of Fundamental Research, Mumbai, won in physical sciences for his work in superstring theory. Chetan E. Chitnis of Delhi's International Centre for Genetic Engineering and Biotechnology won in biological sciences, for work that led to development of a malaria vaccine currently under trial. Chandrashekhar Khare, professor of mathematics at the University of California in Los Angeles, won for mathematics. "His work was outstanding and many of his ideas may have originated while he was in India," says Srinivasa Varadhan, mathematical sciences jury chair.

The engineering prize went to Ashutosh Sharma of IIT Kanpur. Sharma had made several fundamental contributions to nanoscience. The social sciences prize went to Amita Baviskar of Delhi University, for her analysis of social and environmental movements in India, and Nandini Sundar of the Delhi School of Economics for her analysis of social identities in India. The social sciences prize was given this year in sociology and social anthropology.

When it instituted the prize last year, the Infosys Science Foundation had first selected as jury chairs Indians abroad with impeccable credentials. They had to be living abroad to avoid conflict of interest with work of their own colleagues. The jury chairs then chose other members, most of whom are non-Indian scientists of the highest calibre. "My professor looked up the names of the jury and said that to be rewarded by these people is high achievement," says Chitnis, the biological sciences prize winner. The jury chairs included eminent figures such as economist and Nobel laureate Amartya Sen, former MIT professor Subhra Suresh (currently the director of the US National Science Foundation), and Shrinivas Kulkarni, the best known astrophysicist of Indian origin.

The Infosys Science Foundation made some important changes to the way prize winners are chosen this year. Last year, the prizes were supposed to be given only to research done in India. From this year, the foundation decided to give the award to Indians living abroad if no suitable candidate was found in India, and to anyone in the world if the jury still does not find research worthy of recognition.

Last year, the engineering and computer science jury did not award the prize. "Despite the pervasion of IT, engineering sciences research is still not of a high quality in India," says R.A. Mashelkar, a jury member and former director general of the Council of Scientific and Industrial Research.

Infosys Science Foundation wants the prize to be known and respected widely by the society, just like the Nobel Prize is. A prize may not motivate scientists to do world-class work, but the field of science in India can do with some glamour like that provided by the Nobel Prize.