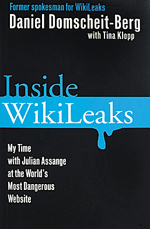 Try as you may though, you cannot shrug away the sense of scepticism while reading the book, more so when you consider the facts - Domscheit-Berg parted ways with WikiLeaks after Assange suspended the author and subsequently expelled him after a public falling out last year. So, what started as hero worship – Domscheit-Berg had prepared a speech for Assange the first time they met at a hacker conference – degenerated into a story of disillusionment. The author's core theme is that as frontmen of WikiLeaks, both Assange and he valued the same principles in the beginning, but it was Assange who over time abandoned these and assumed dictatorial traits, in Domscheit-Berg's view, like those public figures Assange started exposing.

The author recounts incidents where Assange invented versions of his past to create a sense of mystery, and others where they falsified information and created fictitious employees for the organisation's nonexistent ‘legal service' and ‘tech' departments for public consumption when, in fact, their office strength was less than a handful of employees. When they were not lying about the volunteer support they enjoyed, Assange was fighting with employees for money and his favorite conspiracy theories and extreme secrecy. Assange was certain that "we wouldn't be safe walking down the street, that our mail and suitcases were being X-rayed, that we had to go underground and needed bulletproof vests".

Pity that the book is peppered with so many irrelevant details about Assange, such as how he ate (filthily), slept (often with groupies), worked (disorganised) and other such banal life habits, sometimes completely relegating WikiLeaks to the background for pages altogether. That and his unabashed plug of his own new rival platform: OpenLeaks, such as praise of employees of the WikiLeaks era who are now on the OpenLeaks team, deters from the book's effectiveness and fails to address broader issues of transparency and freedom of speech that WikiLeaks was founded upon. He may well have performed a good deed by blowing the whistle on the world's favorite whistleblower, but neither Domscheit-Berg nor his book came out smelling of roses. Strictly recommended for those with an interest in the subject and a lot of patience.