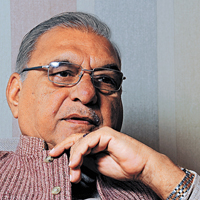 08 November, 2014
Print this article Font size -16+
Towards the middle of this decade, Gurgaon, in Haryana offered better infrastructure that Delhi found difficult to provide. However, after the initial explosive growth, the city's infrastructure began to crumble, with roads, electricity and water unable to meet the growing demand. Haryana's chief minister Bhupinder Singh Hooda speaks to BW's M. Rajendran on the problems Gurgaon faces, and possible solutions. Excerpts:

Which big cities in Haryana can compete with global cities?
There are many; the top ones are Gurgaon, Faridabad and Panchkula. We are also developing new cities such as Sonepat on the lines of Gurgaon. In the hinterland, we are developing Hissar; it has the potential to compete with many top cities in India.

You mentioned Gurgaon. It showed a lot of promise, but it has lost its way. Was there a problem in its conceptualisation?
The city of Gurgaon was conceptualised before I became chief minister. So, I cannot comment on how it was conceptualised. Something happened (went wrong) initially. As soon as I took over, I have tried to develop it. A new master plan 2021 has been passed. It has a road map to make Gurgaon the best city in India, conforming to international standards.

What went wrong?
Gurgaon initially grew due to its proximity to the airport and south Delhi. It was an unplanned city and grew that way. The new Gurgaon, which was planned, added to the problem. Under the new master plan, we will address these (issues). We have planned broad roads to remove congestion. Even the congestion that we see on the road connecting Mehrauli and Gurgaon will be removed. The plan also has the provision of parking, which is not currently available.

Does the master plan take care of the future growth and demands of Gurgaon?
Certainly. We are aware that Gurgaon has fast become a financial, commercial and information technology city, and we are also aware of the demands for better infrastructure. All the concerns are covered in the master plan that is under implementation. Water is a basic demand and we have started work on a new canal; demand for electricity will also be met. A good educational institution is another aspect that big cities should have. Adequate sports and entertainment facilities are also other aspects that make a mega city.

What about the law and order problem in Gurgaon? It is a major issue…
We have taken adequate steps to provide safety to the people and have undertaken some new strategies. For example, in Gurgaon and Faridabad, there is no system of superintendent of police, but only commissioner of police, like in Delhi, who are more empowered. So law and order has improved in the two cities.

Haryana has done well in sports. But why is Gurgaon, despite being near Delhi, not yet a sports destination?
We have taken some policy decisions for  Gurgaon and many other cities in the state. We have to provide the infrastructure; our government's focus is to tap and nurture talent of 8-19-year-olds in rural areas, and we have built more than 150 stadiums, each costing more than Rs 50 lakh. Academies are being built around them. Gurgaon will soon get a football academy. Scholarships would also be given to 5,000 sports students who qualify in the tests; they would get Rs 1,500-2,000 per month depending on the age group.