Washington [US], January 23 (ANI): The popular late-night sketch series 'Saturday Night Live' has announced its first batch of hosts for the new year with actor-director John Krasinski gearing up to make his Studio 8H debut.
According to Fox News, the 41-year-old actor's episode is set to air on Saturday, January 30.
Krasinski will be joined by musical guest Machine Gun Kelly.
"Aaaaaand cue the pinching myself. #SNL," he tweeted on Friday (local time). 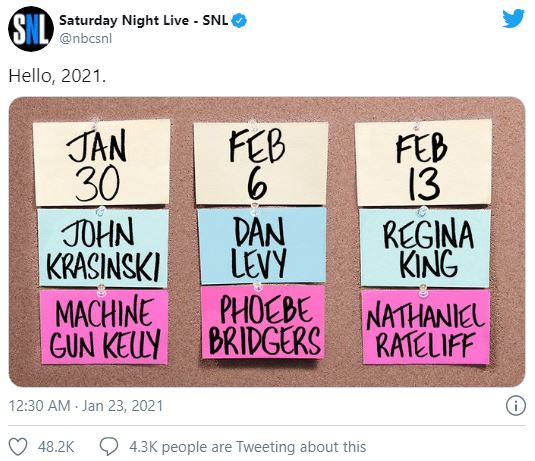 As reported by Fox News, on February 6, 'Schitt's Creek' creator-actor and Emmy-winner Dan Levy will make his debut accompanied by musical guest Phoebe Bridgers. "OMFG," he tweeted.
And on February 13, Oscar-winner Regina King will host and Nathaniel Rateliff is set as the musical guest.
In March 2020, Krasinski was supposed to host the show, but the coronavirus pandemic delayed production of the late-night sketch series.
On October 3, 2020, 'SNL' returned for its 46th season, and the show's hosts included Chris Rock, Bill Burr, Issa Rae, Adele, John Mulaney, Dave Chappelle, Jason Bateman, Timothee Chalamet and Kristen Wiig.
On 'SNL's last show of 2020, the show revealed cast member Alex Moffat as the new 'SNL' President Joe Biden - hours after comedian Jim Carrey announced on Twitter that he was retiring from his short stint as Biden.
Vice President Kamala Harris will still be played by Emmy-winner Maya Rudolph, while mainstay Alec Baldwin will have to be replaced as former President Donald Trump.
"I don't believe I've ever been this overjoyed to lose a job before!" Baldwin wrote on Twitter. (ANI)