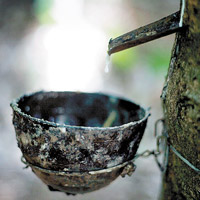 08 November, 2014
Print this article Font size -16+
Domestic tyre makers are set to gain as the price of natural rubber, which accounts for 44 per cent of the tyre industry’s raw material costs, is on the decline. The buoyant mood is reflected in the share prices of leading tyre makers such as Apollo, MRF, JK Tyres and Ceat, which are trading close to their respective monthly highs.
“This is only a temporary drop. Traditionally, domestic rubber prices have been marginally ahead of international prices, and we expect that it will catch up soon,” says Neeraj Kanwar, Vice Chairman & Managing Director, Apollo Tyres, India’s second-largest tyre maker.
According to the Rubber Board data, the price of natural rubber fell to Rs 164 a kg on 12 December, way below the average price of Rs 191 a kg during 2010-11. It had peaked to nearly Rs 250 a kg before the fall started some months ago. The market intelligence wing of the Kerala Agricultural University recently predicted that natural rubber prices will hover around Rs 171 a kg in the near term.
While the automotive tyre sector accounts for nearly 50 per cent of rubber consumption, the rest is used in the manufacture of bicycle tyres and tubes (15 per cent), footwear (12 per cent), belts and hoses (6 per cent). According to the Automotive Tyre Manufacturers Association, the industry consumes raw materials worth Rs 21,000 crore every year, which is approximately 70 per cent of the industry’s turnover.
The Agricultural Market Intelligence Centre (AMIC) of the university, in its report released on 29 November, said that the downtrend is not going to reverse anytime soon. “The price of natural rubber will continue to remain subdued on account of weak demand, economic slowdown, widening gap between domestic and global prices, operation of the downward price cycle, dependence on import, growing inventory levels and soft crude oil prices,” it stated.
“Rubber prices are very sensitive. Even a mere mention of decline in demand can cause the prices to fall,” says a Kerala-based rubber dealer. The state accounts for over 90 per cent of the total rubber production in the country.
Global natural rubber production is estimated to be higher this year at 108.6 lakh tonnes, 5.13 per cent more than the 103.3 lakh tonnes in 2011-12. “The build-up of inventory due to the Tripartite Rubber Council’s (comprising leading rubber producers Thailand, Indonesia and Malaysia) decision to impose a product and export cut with effect from 1 October 2012 until March 2013 proved not only ineffective but provided ample room for non-member countries like Vietnam to take advantage.

The huge stock that has accumulated as a result would prove counterproductive, and will add pressure on the prices in the coming days as peak production phase sets in,” AIMC predicts.