New Delhi [India], October 21 (ANI): Almost a week after talking about beating cancer, senior actor Sanjay Dutt on Wednesday shared the news of his recovery with his fans on the day of his child Shahraan's birthday.
Dutt took to Twitter to share a statement about his health update and expressed gratitude as he revealed that he has recovered from his illness.
He began the note by stating how "difficult" the past weeks had been for him and his family.
"The last few weeks were very difficult time for my family and me. But like they say, God gives the hardest battles to his strongest soldiers. And today, on the occasion of my kids' birthday, I am happy to come out victorious from this battle and be able to give them the best gift I can -- the health and well-being of our family," his statement read. 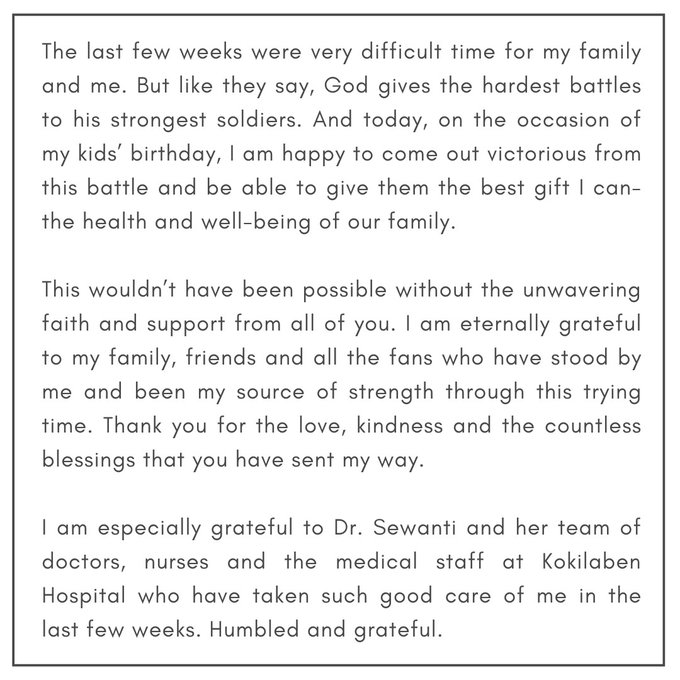 The 'Munna Bhai M.B.B.S,' actor went on to thank his fans, family, and friends for the "unwavering faith and support," that they have extended towards the actor.
"This wouldn't have been possible without the unwavering faith and support from all of you. I am eternally grateful to my family, friends and all the fans who have stood by me and been my source of strength through this trying time," he said.
"Thank you for the love, kindness and the countless blessings that you have sent my way," the 61-year-old actor added.
Dutt ended the note by extending gratitude towards his doctor Dr Sewanti and medical staff at Mumbai's Kokilaben Hospital.
"I am especially grateful to Dr. Sewanti and her team of doctors, nurses and the medical staff at Kokilaben Hospital who have taken such good care of me in the last few weeks. Humbled and grateful," the 'Sadak,' actor's statement read.
After being hospitalised for two days due to breathlessness, Dutt had earlier in August announced that he is taking a break from work due to his health conditions.
Following Dutt's announcement, his wife, Manyata, released a statement sharing an update about his health, and urged people to not "fall prey to speculations and unwarranted rumours." (ANI)