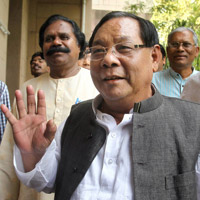 The petition filed by Sangma has contended that Mukherjee was holding the office of profit as the chairman of Indian Statistical Institute when he had entered into the race for the President.