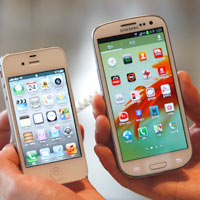 08 November, 2014
Print this article Font size -16+
Samsung Electronics grabbed more smartphone market share from archrival Apple Inc in the latest quarter, with sales of its phones jumping to account for one third of the global market.

Sales of the iPhone 5 helped Apple's volumes grow 6.6 per cent to 37.4 million phones in the quarter from a year earlier, but that was not enough to stop its share of the market dropping to 17.3 per cent from 23 per cent, research firm IDC said.

A flood of cheaper Android-powered devices from the South Korean maker lifted its shipments about 60 per cent to 70.7 million, giving it a 32.7 per cent of the market, up from 28.8 per cent a year earlier. During the first quarter Samsung shipped more smartphones than the next four vendors combined, IDC said.

The research firm said it was eager to see how new phones from Samsung using its Tizen operating system will look and fit into the company's product line-up.