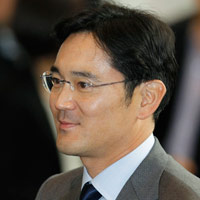 08 November, 2014
Print this article Font size -16+
Samsung Electronics pushed the annointed heir of the company Chairman closer to the top job on 5 December as it cemented a global lead in smartphones with a stock price that is close to record highs. The promotion of the snappily-dressed and bespectacled Jay Y. Lee, aged 44, to the job of vice chairman comes after

"It is a stamp of approval from the chairman that the vice chairman has shown capability to manage Samsung. It's a major step forward (for Jay Lee to become) the future successor at Samsung," a Samsung executive familiar with the matter said.

Jay Lee is already chief operating officer and president and was thrust into the spotlight in June when then Samsung Electronics chief executive Choi Gee-sung, known to be his mentor, was promoted to lead the entire Samsung group's strategy, a defacto No.2 role within the group to chairman Lee.

Observers said at the time that Choi's move was aimed at preparing a succession plan for Jay Lee.

"As Vice Chairman, Lee will build on his existing responsibilities and take a broader role in managing Samsung Electronics' businesses," Samsung said in a statement.

"Lee will continue to play a critical role in transforming Samsung's business model - the set (product) business into one based on a platform and the component business into a total solution provider."

From Small Trading Company To Tech Giant
Samsung Group was founded in 1938 by Lee Byung-chull, Jay Lee's grandfather, as a small trading company and Samsung Electronics which is the jewel in the crown of its vast industrial empire now sells more televisions, memory chips, flat screens and mobile telephones than any other company.

Samsung Electronics alone is worth $195 billion based on Tuesday's closing share price.

Jay Lee will have big shoes to fill as it was under his father's watch that Samsung Electronics was transformed into from a low cost producer into a global player that has overtaken Apple Inc in terms of smartphone sales.

The annual Samsung reshuffle of top management, of which Jay Lee's promotion is a part, comes as South Korean chaebols, or big business groups, are under pressure to reform amid growing anger over their dominance in an economy where wealth gaps are widening.

The issue of family succession is viewed as a key marker of transpareny and presidential candidates from the ruling and opposition parties have pledged 'economic democratisation' in a bid to rein chaebols' growing economic prowess.

"I think JY Lee's promotion means that he has somewhat proved himself worthy of following in his father's footsteps," said a fund manager at foreign fund based in Seoul who owns 2 million shares in Samsung Electronics.

"However, because of the political climate that is bent on economic democratization which frowns on the cross-shareholding structure, it would be better if the company were to be sensitive to minority and outside voices," said the fund manager who could not be named due to his company's media policy.

While Jay Lee steers clear of the limelight when his father appears in public, he has become the first point of contact at Samsung for many key customers and competitors.

Critics say he lacks his father's charisma, business insight and entrepreneurship and that he faces tough challenges, not least a patent battle with Apple that is being fought out in courts across the globe.

Lee has a degree in East Asian history from Seoul National University, an MBA from Keio University in Japan and also attended the doctoral programme at Harvard Business School. He has two children and went through one of Korea's highest profile divorce cases.