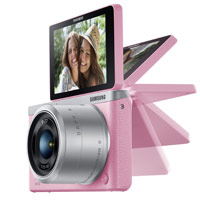 08 November, 2014
Print this article Font size -16+
Samsung Electronics announced the launch of the NX mini - slimmest and lightest interchangeable-lens camera, will be available exclusively through Amazon.in as part of a strategic partnership.

Asim Warsi, Vice President, Mobile & IT, Samsung India said, "This shift in our strategy is created to meet the needs of our customers who are constantly looking for the best in technology. We understand the buying patterns of our consumers and are constantly strengthening our network to cater to their evolving needs. This offering through Amazon.in will enhance accessibility for the NX mini camera".

The latest addition to the NX series, NX Mini SMART camera sports a portable and stylish design and offers stunning image quality which makes it the perfect ‘go-to’ camera for capturing special moments. This power packed camera with a 1” BSI CMOS sensor and innovative features like Wink Shot and Baby Monitor, also boasts of NFC and Wi-Fi capabilities that allow sharing of images on a real-time basis. The NX mini is world’s slimmest and lightest interchangeable-lens camera which will be sold on Amazon.in.

ValueFirst Acquires Social Media Mandate For Govt Of Madhya Pradesh
ValueFirst Digital Media, a leader in digital and mobile communication, acquired the social media mandate for Madhya Pradesh Madhyam which is a PR body for the government of Madhya Pradesh.

Started in 2003, ValueFirst offers targeted marketing services through its digital platforms and properties to over 2,500 customers. It uses both the Internet and mobile to engage with consumers through multiple communication channels like SMS, voice, e-mail, WAP, mobile video and social media.

Vish Bajaj, CEO, ValueFirst, said: "We welcome this opportunity and are keen to become an integral part of the state and central government initiatives on transforming our nation into a 'Digital India'."

It will be responsible for managing the social media presence on behalf of the Madhya Pradesh government which includes their social media properties such as Facebook, Twitter, YouTube etc. to raise the awareness of the state government's initiatives.

Aroon Kumar, Vice President - Marketing & Social Media, said, "We have invested into building the best social media talent and tools in the country which will allow us to service Madhya Pradesh government as well as other similar government projects. We are focusing on creating teams which understand government agendas and their connect with the citizen of India."

India PC Market Improves In Q2 2014: IDC
The overall India PC shipments for Q2 2014 stood at 2.55 million units which is a substantial quarter-on-quarter growth of 23.6 per cent over Q1 2014 and year-on-year drop of 27.8 per cent over Q2 2013. The market remained upbeat buoyed by business purchases, as well as channel intake of low priced PCs at the end of the quarter.

The commercial PC segment emerged stronger against expected performance with 1.38 million units shipped in Q2 2014 with a quarter-on-quarter growth of 34.5 per cent over Q1 2014. A clear mandate in elections signalled a mark of recovery in the economy. Against last calendar year, business prospects are expected to remain moderately better in the coming six months..

The Overall consumer PC market recorded 1.16 million units, a quarter-on-quarter growth of 12.8 per cent over Q1 2014. “The overall sentiments have picked up and IDC observes improved discretionary spending from consumers across devices. It is expected to have a  positive influence on the market as we enter the festival season starting Onam,” comments Manish Yadav, Market Analyst, Client Devices, IDC India. The retail and online acceptance of new product category such as Bing SKU facilitated growth this quarter.

PC market looks to recuperate in due course of time. “IDC anticipates increase in consumer spending both as a result of seasonality owing to festive buying and cautious end user spending on high end smart phones. This indeed was driving away wallet share in the recent past,” adds Kiran Kumar, Research Manager, Client Devices, IDC India.

Saurabh Bhatia Becomes The New CEO For Vdopia
Vdopia Inc, rich media advertising, announced a realignment of its top management that positions the company to expand on and expedite its product offerings and enable the company to meet the distinct demands and challenges of the ad tech industry.

Saurabh Bhatia, who co-founded Vdopia, in 2007, has appointed as Chief Executive Officer, succeeding Srikanth Kakani (also a co-founder) who became Chief Technology Officer and Chhavi Upadhyay, another co-founder, who has served as Chief Operating Officer, became it's President.