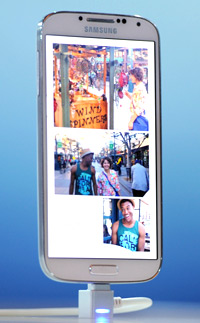 The phone, packed with newer imaging features as well as 'gesture-control' technology will be available at the company's premium brand stores in Delhi, Bangalore, Hyderabad and Mumbai from 12 noon onwards on 27 April, while pan-India availability will be in a couple of days.

"At Samsung, we are committed to innovation and to our consumers...we are proud to announce the launch of our flagship device and the much awaited, Samsung Galaxy S4," Samsung Electronics President and CEO (South West Asia) B D Park said here.

The company had unveiled the phone in the US last month.

Asked about the competition Samsung is facing from local manufacturers which are offering smartphones with similar features at a lower price point, Samsung Mobile and Digital Imaging Head Vineet Taneja said: "...I can assure you that none of the stuff that we spoke about on S4 is actually available easily in other smartphones."

He said the company invests huge amount of money on its R&D set up across the world including India in order to ensure the hardware is rock solid and state-of-the art.

A new feature included in phone is 'Smart Pause' where users can pause a video just by looking away from the screen.

It also has 'Air View' feature, which allows users to hover with their fingers to preview the content of an email, S Planner, image gallery or video without having to open it by just gesturing in air.

The S4 has new imaging features like 'Dual Camera' and 'Dual Video Call', allows users to click pictures and make video calls using both the front and rear cameras simultaneously.

Meanwhile, Samsung has tied up with Vodafone for S4 wherein customers will get unlimited Internet, up to 3,000 local and STD minutes and up to 750 local and national SMS.