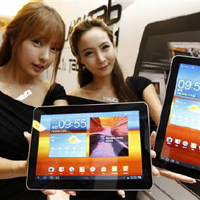 08 November, 2014
Print this article Font size -16+
South Korean technology powerhouse Samsung Electronics Co posted a fourth straight record quarterly profit — of $7.4 billion — with strong sales of its Galaxy range of phones masking sharply lower sales of memory chips. The record run, though, is likely to end in December, with profit growth slowing even more next year as TV markets stagnate and growth in high-end smartphones eases from the recent breakneck speed. Profit is expected to grow 16 per cent next year, down from a forecast 73 per cent this year, according to Thomson Reuters I/B/E/S.

"The biggest concern for Samsung is that its smartphone growth momentum will slow. It will be difficult to maintain such a high profit margin from handsets as the market gets crowded and competition will intensify," said Nam Dae-jong, an analyst at Hana Daetoo Securities.

Samsung sold 56.3 million smartphones in the third quarter, according to research firm IDC, giving it a global market share of 31.3 per cent — more than double that of Apple, which said it sold 26.9 million iPhones. Apple launched its latest iPhone 5 on September 21.

Samsung said it will book patent-related provisions once a U.S. court rules on its litigation with Apple. A U.S. federal jury said in August that Samsung had copied key features of the iPhone, awarding Apple $1.05 billion in damages. Apple has since asked for another $707 million, and the California court is set to rule on that in early December.

"The amount of provisioning will be fixed according to the U.S. court ruling, and the costs will be set aside this quarter only if there's a ruling within the current quarter," said Robert Yi, head of Samsung's investor relations.

Next Big Thing
While Samsung outsells Apple in gadgets, the Korean group's market value is just a third of the US firm's $578 billion, and investors question whether it can narrow that gap as the stellar handset business is set to lose steam and Apple, also its biggest customer, looks to spread its supplier base wider.

"Samsung has a lot of strong businesses like tablets, OLED TVs and micro-processor chips that could become its next big thing and step it up to the next level," said Lee Sun-tae, analyst at NH Investment & Securities. "But these aren't fully ready to become a real earnings driver like the Galaxy."

Illustrating the might of Samsung's handset business, third-quarter profits from the mobile division more than doubled to 5.63 trillion won — 69 per cent of total group profit — as sales of the Galaxy S III, introduced in late May, powered ahead of the iPhone 5 launch. Samsung is estimated to have shipped 18-20 million S IIIs in July-September.

But strong sales of Apple devices — iPhones, iPads and iPods — also help the Korean group, which makes chips, micro-processors and flat screens for the popular gadgets.

Still Samsung shares trade more cheaply — at 7.5 times next year's estimated earnings versus Apple's 11.6 times — as its broader business portfolio, including thin-margin washing machines and fridges, makes it more vulnerable to weak consumer spending. Shares in Samsung have climbed 24 per cent this year, easily outpacing the benchmark KOSPI's 5 per cent gain, but only half the gains made by Apple.

Samsung traded down 2 per cent in Seoul on Friday.

"It will take time for Samsung to narrow the gap with Apple in tablets. Its Galaxy Tab tablet PCs aren't sexy enough to outsell Apple's iPad," said NH Investment's Lee. "There are concerns Samsung's earnings would peak this year. There's little room for its mobile business to make more money, while there's a limited upside in chips and displays."

New Drivers
Samsung is now looking to a new range of mobile products, such as its Ativ tablets using Microsoft's new Windows operating system, to propel growth. And it needs new clients for its screens and chips as Apple peels away to other suppliers.

Samsung has stopped supplying displays for the iPhone, and has a reduced role in the iPad panel — down to 26 per cent this quarter from 38 per cent a year ago, according to DisplaySearch. Apple is buying fewer memory chips from Samsung for the iPhone 5, relying more on SK Hynix Inc and Elpida Memory.

Bernstein analysts reckon Apple will also gradually phase out Samsung as the main supplier of the mobile micro-processor, used to power the iPhone and iPad, and shift to rival supplier TSMC, starting late next year.

Despite Apple's migration to rival suppliers, Samsung's display division returned to a profit of 1.1 trillion won from a year-earlier loss, on improving sales of mobile displays used in the Galaxy series and other high-end phones and tablets.

"That key component market is getting tighter, thanks to the mobile boom. There are now lots of IT companies producing tablets and ultrabooks. This will restore the component supply imbalance, which has been extremely skewed to Apple due to its huge bargaining power," said Kim Sung-in, an analyst at Kiwoom Securities.

Chips Are Down
Third-quarter profit at Samsung's chip division, which competes against Toshiba Corp and SK Hynix, dropped 28 per cent to 1.15 trillion won as prices of dynamic random access memory (DRAM) chips sagged, though a recovery in NAND flash chips, widely used in mobile devices, helped offset the weakness. The company said it expected DRAM oversupply to run on into the current quarter, but the NAND market would be tight.

Samsung predicted the year-end holiday season would see only a muted rise in demand as consumers from Europe to the United States spend cautiously in a weak economy. It said it would look to protect margins by increasing mobile micro-processors and improving the mix of high-value memory chips.

Underscoring the weak demand, the Bank of Korea said on Friday the economy grew just 0.2 per cent in July-September from the previous quarter, with companies spending less because of the export gloom.

Samsung's quarterly revenue was equal to around a fifth of South Korea's GDP.