Salman Khan's 'Radhe' to release in theatres on Eid 2021

Salman Khan's 'Radhe' to release in theatres on Eid 2021

New Delhi [India], January 19 (ANI): Putting end to all speculations around the release of his much-awaited film 'Radhe,' megastar Salman Khan on Tuesday revealed that action-thriller will be released on the big screens on Eid this year.
The 'Sultan' actor shared the information through a statement on Instagram and also apologised to "all the theatre owners" for taking a long time to give an update on the release of the film.
"Sorry it has taken me a long time to revert to all the theatre owners... It's a big decision to make during these times," Khan wrote.
He took cognisance of the financial problems that the theatre owners have been facing due to the coronavirus pandemic and said that he will be releasing 'Radhe' in theatres to help them.
"I understand the financial problems that the theatre owners/exhibitors are going through and I would like to help them by releasing Radhe in theatres," his statement read. 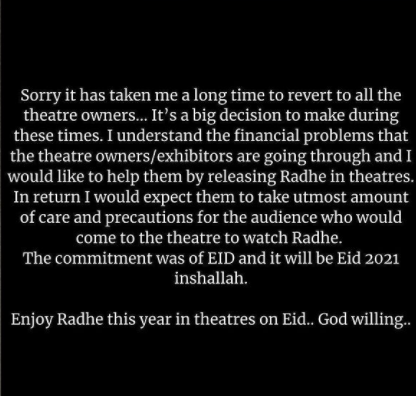 "In return I would expect them to take utmost amount of care and precautions for the audience who would come to the theatre to watch Radhe," Khan's statement further read.
The 'Tubelight' actor ended the note by sharing that he will be sticking to his commitment of releasing the film on Eid this year.
"The commitment was of EID and it will be Eid 2021 inshallah. Enjoy Radhe this year in theatres on Eid.. God willing," his statement read.
This comes just three weeks after Khan announced wrap on the shooting schedule of the much-awaited flick.
The action flick by the Yash Raj Films banner was scheduled to release on Eid 2020 but it could not see the light of the day due to the closing of film theatres owing to coronavirus-induced lockdown.
The movie will see Salman Khan romancing Disha Patani. The flick also features Jackie Shroff and Randeep Hooda.
'Radhe' is co-produced by Salman Khan, Sohail Khan and Atul Agnihotri under the banners Salman Khan Films, Sohail Khan Productions, and Reel Life Production. (ANI)