New Delhi [India], Aug 15 (ANI): As India celebrated 74th Independence Day on Saturday, several Bollywood celebrities took to social media to extend Independence Day greetings to their fans.
Celebrities like Salman Khan, Sanjay Dutt, Sushmita Sen, and others expressed love for the nation on social media.
Megastar Salman Khan in his Independence Day tweet advised people to always be "reliable and dependable."
"Be 100% reliable and dependable ... Happy Independence Day ... Jai Hind," he tweeted.
Actor Sanjay Dutt who had recently announced a break from work due to his health problems took to Twitter and said, "Jai Hind. Happy Independence Day to all."
'Stree' actor Rajkummar Rao, on the other hand, posted a picture of himself holding two small Indian flags on Instagram.
"Swantrata ki bahut bahut badhaai. Mera bharat mahaan. Jai Hind (Congratulations on the Independence. My India is great. Jai Hind)," he wrote in the caption.
Former Miss Universe and actor Sushmita Sen also took to Twitter and posted a picture of the Indian national flag fluttering in the sky and wrote, "Happy 74th Independence Day, My Motherland #pride #salute INDIA JAI HIND."
Actor-director Farhan Akhtar posted an illustration of a child holding the tricolour flag and captioned it with a poem by Indian poet and Nobel laureate Rabindranath Tagore. 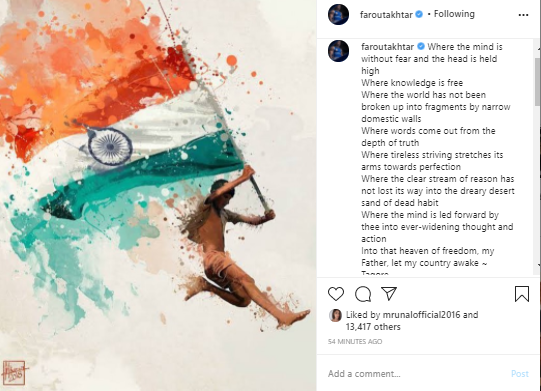 India on Saturday celebrated its 74th Independence Day in a relatively muted manner in terms of participation of people in view of the COVID-19 crisis. (ANI)