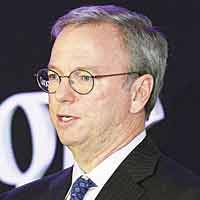 08 November, 2014
Print this article Font size -16+
SALE SEASON: Eric Schmidt, 57, Google’s executive chairman, will sell 3.2 million shares (amounting to around 42 per cent of his stake) for $2.5 billion, the search giant said in a filing with the US Securities and Exchange Commission. The plan, which Google said would give Schmidt “individual asset diversification and liquidity”, allows him to spread the sale over a period of one year to reduce the market impact. Schmidt, who served as Google’s chief executive until 2011, currently owns roughly 7.6 million shares of Class A and Class B common stock. Though he helped turn Google into the world’s No.1 search engine during his decade as CEO, he had to hand over the reins to Google co-founder Larry Page in April 2011 following a lacklustre performance vis-a-vis peers. Schmidt had earlier sold 1.8 million shares over the past year.

FIREWALLED: Dell Inc.’s largest independent shareholder, Southeastern Asset Management, has vowed to fight a $24.4 billion buyout of the No. 3 PC maker led by CEO Michael Dell, thus cementing opposition to what would be the largest buyout since the start of the financial crisis. The opposition sets up a potential battle with billionaire founder Dell and private equity firm Silver Lake, who are pushing a deal to take the company private at $13.65 a share.

AERIAL UNION: AMR Corporation and US Airways Group sealed an $11-billion merger agreement to create what will become the world’s largest airline, with 6,700 daily passengers and a 13,000 workforce. The tie-up is the fourth major merger in the US airline industry since 2008, when Delta Air Lines bought Northwest. United and Continental merged in 2010 and Southwest Airlines bought discount rival AirTran Holdings in 2011.

TRIMMING FLAB: European Union leaders reached an agreement on the first-ever cut in their common budget on 8 February. The expected deal met the demands of northern European countries such as Britain and the Netherlands that wanted belt-tightening, while maintaining spending on farm subsidies and infrastructure to satisfy the likes of France and Poland. It is the first net reduction to the EU’s long-term budget, with a decrease of around 3 per cent on the last budget and shaving spending in areas like infrastructure, bureaucracy and scientific research.

CHOPPER CAPER: On 12 February, Giuseppe Orsi, chief of Italy’s biggest defence group Finmeccanica, was arrested over allegedly paying bribes to secure a €560 million, 12 helicopter deal from the Indian Air Force (IAF) in 2010. At the time, Orsi was heading the group’s helicopter firm AgustaWestland. The Italian investigation said that in exchange for bribes, then IAF chief S.P. Tyagi altered tender norms. Defence minister A.K. Antony said the deal would be cancelled if the charges were proved. A CBI team is being sent to Italy to probe the charges that kickbacks were paid.

MEAT MIX-UP: High-stake lawsuits and overlapping investigations are spreading across the European meat industry. Horse meat was found in products that are supposed to be 100 per cent beef, sold in Sweden, the UK and France. While authorities say there are no immediate health concerns, this was a new shock to an industry already reeling from January’s scandal when Irish investigators found horse and pig DNA in many hamburger products.

OUT OF COURT: Rupert Murdoch’s firm has paid substantial damages to actors Hugh Grant and Christopher Eccleston as part of a mass settlement of lawsuits related to phone-hacking by some of the firm’s employees. News International, owned by News Corp, settled 144 cases, officials at London High Court said.


POWER BOOST: Bank of Italy governor Ignazio Visco has sought more powers for bank regulators to step in and dismiss bad managers, but defended his institution’s oversight of a troubled Tuscan lender at the centre of a financial and political storm over a series of problematic derivatives contracts. “The supervisor should have the power to intervene when it believes it is necessary to oppose the appointment of (bank) executives or to remove them,” Visco said.

BOLIVAR TAKES A DIVE: Venezuela has cut the value of its currency against the US dollar by 32 per cent, in an effort to boost its economy. The widely expected measure ramps up the official exchange rate of the bolivar from 4.3 to 6.3 per US dollar. Vice-president Nicolas Maduro announced the devaluation on his return from Cuba, where he met ailing President Hugo Chavez, undergoing cancer treatment.

LABOUR PAIN: Hewlett-Packard has directed suppliers in China to limit the use of student labour, a move that reflects rising concerns in the tech community about working conditions in overseas factories. The new standards are among the most stringent in the industry. Suppliers will be expected to comply immediately, and will be subjected to more frequent audits.

LOOKING UP: China has reported improved trade data estimates, fuelling optimism that its economic growth may be on the rebound. Exports, a key growth driver, surged 25 per cent in January from a year earlier, against a forecast of 17 per cent. Imports surged 28.8 per cent, indicating a pick-up in domestic demand. Inflation rate also slowed to 2 per cent in January.

SONY SLUMP: On 8 February, shares of Japanese electronics maker Sony slumped 10 per cent after investors responded to the firm’s results — its biggest share price fall in years. The firm reported losses of 10.8 billion yen ($115 million) during October-December. The latest quarterly figures brought total losses in the nine months till end-December to 50.9 billion yen. There is increasing speculation about whether it will regain its former glory.