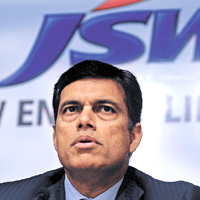 08 November, 2014
Print this article Font size -16+
A single arrow is easily broken, but not 10 in a bundle. Fifty-year-old Sajjan Jindal, a new-age steel baron, seems to be toying with the idea of that Japanese proverb. To fill his quiver with steel arrows, his team of professionals is in Japan, negotiating with the world's fifth-largest producer JFE Steel Corp. for buying a 5 per cent stake in that company. The deal is expected to conclude in a week, says a banking source.

"We have an option of picking up a stake in JFE, but nothing has been finalised," says M.V.S. Seshagiri Rao, joint MD and group chief financial officer of JSW Steel, in a conversation with BW from Japan. Vice-chairman Sajjan Jindal is also in Japan. JSW's plan is the second such effort to strengthen their ties. Two months ago, JFE signed a deal to take 14.99 per cent stake in the Indian firm for Rs 4,800 crore (JFE got 32 million shares of JSW on 7 October) and agreed to share technology. The two companies also decided to cooperate in JSW's proposed 10 million tonne (mt) steel plant in West Bengal.

What will change in the Indian steel industry after this marriage? JSW will be able to access high-end technology for producing value-added products, especially in making automotive steel, where "the Japanese are acknowledged specialists, followed by Koreans", says Prasad Baji, senior vice-president at Edelweiss Securities in Mumbai. "Tata Steel leads the pack in India."

JSW could pose a challenge to the Tatas in India, where many foreign car makers have manufacturing bases. Almost in tandem, earlier this year Tata Steel approved a joint venture with Nippon Steel for the production and sale of automotive cold-rolled flat products at Jamshedpur. Other Japanese steel makers are exploring similar opportunities: Sumitomo Metal with Bhushan Steel, and Kobe Steel with NMDC.

A study by global consulting firm Ernst & Young says India's car sales will double from 2.2 million units in 2009 to just over 5 million in 2015 and just short of 10 million by 2020, a trend seconded by Renault-Nissan chief Carlos Ghosn and Volkswagen global CEO Martin Winterkorn. JFE will get access to the largest emerging markets with this deal.

Beyond automotive steel, JSW will get technology assistance for improving operational efficiency and cost reductions, says JSW's Rao. Both steel makers also plan to acquire raw material (iron ore and coking coal) jointly and acquire mines in the process. Baji says joint sourcing will give them better bargaining power, as their requirements would be higher. Together, they could acquire bigger assets, too. JFE may not be that big in mining, but JSW has enough experience in India.

What about the other side of the coin, the risks? If the stock price of JFE falls in Japan, JSW will also be affected. JSW also needs to worry about an exit option, and a lock-in for its investment when signing off on the deal, says an international banker. Jindal may have the arrows, but needs to hit the bull's eye.