New Delhi [India], Aug 27 (ANI): Questioning what is 'claustrophobia', actor Ankita Lokhande on Thursday shared an old video of late actor Sushant Singh Rajput on social media where he is operating an aircraft by himself.
The relevance of the post is in connection with one of the statements actor Rhea Chakraborty made during an exclusive interview with a media channel.
Earlier during an interview, Chakraborty claimed that the 'Kai Po Che!' actor felt 'claustrophobic' in a flight.
Slamming the claims, Rajput's former girlfriend, Lokhande shared a video on Twitter and wrote: "Is this #claustrophobia?" 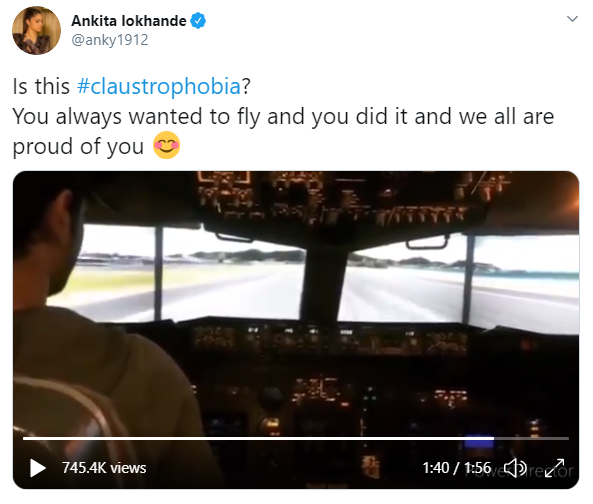 The one-minute and 56-seconds long video saw the 'Kedarnath' actor dedicatedly and excitedly experimenting with the flight simulator.
"You always wanted to fly and you did it and we all are proud of you," Lokhande tweeted alongside the video.
While the Narcotics Control Bureau (NCB) has registered a case against Chakraborty and others in connection with Rajput's death case.
The NCB has registered the case under various sections of the Narcotic Drugs and Psychotropic Substances (NDPS) Act, 1985, including Section 27 which specifies punishment for consumption of any narcotic drug or psychotropic substance and 29 which provides for punishment in case of abetment and criminal conspiracy. (ANI)