London [UK], January 23 (ANI): As England openers Dom Sibley and Zack Crawley continue to struggle against Sri Lanka's spinners, former England skipper Kevin Pietersen on Saturday shared an email sent by Rahul Dravid to him as he felt it might help both batters tackle spin.
Sibley (0) and Crawley (5) were once again dismissed by Lasith Embuldeniya in the first innings of the ongoing second Test on Saturday. This is the third time in a row that both batters were sent back to the pavilion by Embuldeniya.
"Hey @englandcricket, print this and give it to Sibley & Crawley. They can call me to discuss it at length if they want," Pietersen tweeted. 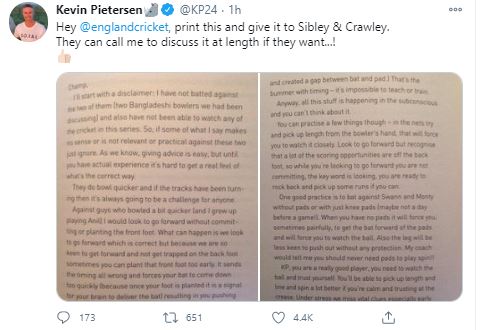 Before sharing the email sent by Dravid, Pietersen had earlier tweeted: "Crawley & Sibley need to go find the email that Dravid sent me about playing spin. Changed my game."
During his playing career, there came a patch when Pietersen was struggling against spinners and the batsman opted to reach out to Dravid for some advice.
Dravid had then sent Pietersen a lengthy email describing how he can get the better of spinners. Pietersen had also described the whole incident in his book titled "KP: The Autobiography".
In his letter, Dravid had advised Pietersen to try picking up the bowler's length out of their hands in the nets. He also asked the English batsman to bat without pads against Graeme Swann and Monty Panesar in the nets, in order to help him to reach the length of the ball.
Sri Lanka spinner Lasith Embuldeniya made early inroads into the England innings on day two of the ongoing second Test, but skipper Joe Root and Jonny Bairstow ensured the visitors stayed on track at the Galle International Stadium on Saturday. At stumps, England's score reads 98/2, trailing the hosts by 283 runs, with Root (67*) and Bairstow (24*) at the crease.
Earlier, England had bundled out Sri Lanka for 381 with James Anderson recording his best bowling figures in Asia -- 6/40. (ANI)