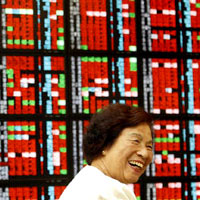 Besides, the Securities and Exchange Commission (SEC) is further probing the role of other companies, which may include some from India, for potential violation of similar nature.

The SEC said in a statement late 27 November night that the four financial services firms were providing brokerage services to institutional investors in the US without being registered with the SEC as required under the federal securities laws.

In their respective settlements, the firms agreed to be censured while neither admitting nor denying the SEC's charges. Ambit agreed to pay disgorgement and prejudgement interest totalling $30,910, Edelweiss agreed to pay $568,347, JM Financial $443,545 and Motilal Oswal Securities agreeing to pay $821,594.

The SEC said that the companies' "cooperation with the Commission staff and their prompt remedial measures", besides their initiating registration with the SEC as a broker-dealer, were "important factors in accepting the firms' settlement offers, particularly the Commission's decision not to impose a cease-and-desist order or a penalty."

The regulator said it "is continuing to look for potential violations at other firms".

With regard to Ambit, SEC said that it systematically solicited US institutional investors for the purpose of providing brokerage services from at least January 2011 through April 2011.

When contacted by SEC in May 2011, Ambit said its solicitation had not yet resulted in significant brokerage business from US investors.

"However, Ambit had received some transaction-based compensation for buying and selling the securities of Indian issuers on Indian stock exchanges on behalf of US investors," the regulator said.

About Motilal, SEC said that it solicited and provided brokerage services to US investors from at least 2007 until April 2011.

As part of its solicitation of US investors, Motilal organised and sponsored an annual conference in the United States to which Motilal brought representatives of Indian issuers and invited US investors, it said.

Further, Motilal bought and sold the securities of Indian issuers on Indian stock exchanges on behalf of US investors in exchange for commissions and soft dollar payments.

During the relevant period, as a result of these activities, Motilal received from at least 42 US institutional investors transaction-based compensation in the amount of approximately USD 13.7 million, it said.

After being contacted by SEC, the regulator said, Motilal promptly undertook corrective action, including by cancelling a planned conference in the US, entering into an agreement with a US registered broker-dealer, and initiating registration with the Commission as a broker-dealer.

JM Financial solicited and provided brokerage services to US investors from at least October 2007 until February 2012, the SEC said.

As part of its cross-border activity with US investors, JM Financial bought and sold securities of Indian issuers on Indian stock exchanges on behalf of at least 91 US investors and received transaction-based compensation of about USD 2.3 million.

For its overall services to Indian issuers, JM Financial received approximately USD 24 million in transaction-based compensation based upon a percentage of the value of the offerings, a portion of which was attributable to purchases by US investors, SEC said.

However, JM Financial also undertook corrective action after being contacted by SEC, the regulator said.

In its order against Edelweiss, SEC said that the Indian firm solicited and provided brokerage services to US investors from at least 2007 until July 2011.

As part of its cross-border activity with US investors, Edelweiss bought and sold securities of Indian issuers on Indian stock exchanges on behalf of US investors and received transaction-based compensation of about $9.4 million, it said.

After being contacted by the SEC staff, Edelweiss also promptly undertook corrective action, including by immediately ceasing all cross-border US business, the regulator said. PTI BJ