SC To Give Early Hearing To Sebi Plea Against Sahara 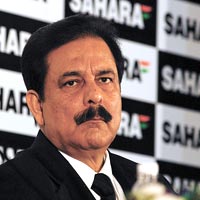 08 November, 2014
Print this article Font size -16+
The Supreme Court has agreed to give an early hearing to Sebi's plea seeking its permission to detain Sahara Group's chairman Subrata Roy Sahara and to initiate contempt proceedings against him for not complying with its orders to refund Rs 24,000 crore to investors.

A bench headed by Justice K.S. Radhakrishnan posted the market regulator's plea for hearing on 22 April. The bench agreed to give an early hearing after Sebi's counsel mentioned the matter before it.

On 15 March, Sebi had moved the apex court seeking arrest of Sahara group promoter Subrata Roy Sahara and barring him from leaving the country after two companies of the group had failed to comply with court's order to refund Rs 24,000 crore to its investors.

Sebi had urged the court to allow it to "take measures for arrest and detention in civil prison of promoter of Sahara Subrata Roy Sahara and the two male directors -- Ashok Roy Choudhary and Ravi Shankar Dubey -- after giving reasonable opportunity of hearing."

Earlier on 6 February, the apex court had issued notice to the Sahara Group and sought its response within four weeks as to why contempt action should not be initiated against its two companies.

It had also said that Sebi was free to freeze accounts and seize properties of the two Sahara companies -- Sahara India Real Estate Corporation (SIREC) and Sahara Housing Investment Corporation (SHIC) -- for defying the court's 31 August 2012 orders to refund Rs 24,000 crore to investors.

The apex court had on 31 August last year directed the two companies to refund around Rs 24,000 crore to their investors within three months with 15 per cent interest per annum for raising the amount from its investors in violation of rules and regulations.

The Sahara group had justified its stand on not refunding the amount and said that a large portion of the amount has already been redeemed to investors before the judgement was delivered.

Earlier on 5 December 2012, the Group had got nine weeks time from the apex court to pay back Rs 24,000 crore with 15 per cent interest to over three crore investors in its two companies, with an immediate upfront payment of Rs 5,120 crore.

A bench headed by Chief Justice Altamas Kabir had ordered the Group to immediately hand over a demand draft of Rs 5,120 crore to Sebi and said the balance amount shall be deposited with the market regulator in two instalments to be cleared by early February.