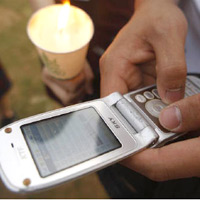 The telecoms regulator's proposal for the near 10-fold increase in basic mobile phone spectrum prices and switching of radio spectrum given to older carriers knocked down shares of leading operators on fears that the big potential payouts will further hurt an already bleeding industry.

No. 2 Reliance Communications fell as much as 3.4 per cent.

The country's telecoms sector, the world's second-biggest by subscribers, has been battered by ferocious competition and a scandal over below-market price sale of lucrative mobile phone permits in a 2008 state sale process.

The Supreme Court has ordered 122 permits granted to eight operators in the 2008 sale be revoked in early June and asked the government to redistribute radioairwaves through an open bidding process.

This would be a blow to companies such as the Indian unit of Norway's Telenor and Indian firm Idea Cellular and Tata Teleservices who are set to lose some or all their zonal permits after the court order, as nationwide spectrum of 5 MHz quantity would cost a minimum $3.6 billion.

While the proposed starting price for the basic second-generation 1800 MHz band is 8 per cent higher than what operators paid for premium 3G spectrum in 2010, the regulator has suggested a base price of 72.44 billion rupees per MHz for spectrum in the 800 and 900 MHz bands held by older operators.

The regulator also suggested that the government should carry out refarming, or switching of, spectrum bands "progressively at an early date". Such refarming is a global practice to resell more-efficient spectrum bands for premium services such as 3G.

But such a move could hit companies such as Bharti and Vodafone's Indian unit, most of whose existing bandwidth is in the more efficient 900 MHz band.

That bandwidth would be replaced with spectrum in the 1800 MHz band, which would increase their capital expenditure, or the companies would have to pay a heavy price to retain the 900 MHz band spectrum.

Goldman Sachs analysts wrote in note the regulator's proposals were negative for the older players as well as the newer entrants as it would "stretch their weak balance sheets".

The proposals would, however, put Reliance Industries that has access to nationwide 4G spectrum at an advantage as the regulator suggested holding auction of fresh 4G spectrum preferably in 2014.

The regulator's proposals are not binding on the government and a panel of ministers will decide on the spectrum rules.

Telecom Operators Up In Arms
Terming regulator Trai's recommendations on spectrum auction as "arbitrary, regressive and inconsistent", telecom operators on Monday had said the proposals will hurt further investment in the sector and expansion of services in rural areas.

"We believe that several of these recommendations are retrograde and if accepted, will do irreparable harm to the industry," Vodafone India said in a statement.

"It will hamper the ability to connect the unconnected and goes against the objectives of National Telecom Policy of ensuring improved rural tele-density and right to broadband," the country's second largest operator said.

Telecom associations COAI and AUSPI termed the recommendations as "being arbitrary, regressive and inconsistent".

"The industry was looking forward to reasonable spectrum reserve price recommendations from Trai in the light of the government's own articulated policy directions on affordability and rural penetration," the associations said in a joint statement.

They alleged that the industry has repeatedly been facing "contradictory and regressive approach" from the regulator, which is detrimental to the future of the sector.

"From deciding to link the price of 2G spectrum to 3G spectrum auctions, to its own expert committee's inputs without the application of any logic ... the regulator's actions appear to be unfair and biased against all operators," they said.