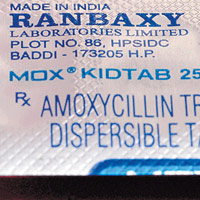 08 November, 2014
Print this article Font size -16+
The Supreme Court on Wednesday (21 May) asked the Andhra Pradesh High Court, which had passed an interim order staying the $4 billion merger of Ranbaxy with Sun Pharma, to decide the issue within two days.

Hearing appeals filed by Sun Pharmaceutical, Ranbaxy Laboratories and Daiichi Sankyo Company against HC interim order, a bench of justices B.S. Chauhan and A. K. Sikri asked the HC to decide the issue and posted the case for hearing on 27 May.

The pharmaceutical giants approached the court seeking its direction to vacate interim order on the High Court which had on April 25 stayed the merger and ordered status quo.

The HC had passed the order on a petition filed by two individual investors who alleged that there was heavy trading of Ranbaxy stock before the merger with Sun Pharma was announced on 6 April.

They had pleaded the court to direct the SEBI to investigate the insider trading of Ranbaxy shares and take appropriate action against Sun Pharma and Silver Street.

Senior advocate Abhishekh Manu Singhvi, appearing for Sun Pharmaceutical, submitted that there is absolute abuse of process of law in the case as the order was passed on a petition of two individuals which would affect the biggest deal in the pharma sector.

The bench, however, said that shareholders have right to challenge the merger and asked the HC to decide the issue.

The Mumbai-based Sun Pharma had on April 6 announced that it would fully acquire Ranbaxy in an all-stock transaction with a total equity value of USD 3.2 billion, along with debt of USD 800 million, taking the overall deal value to USD 4 billion.