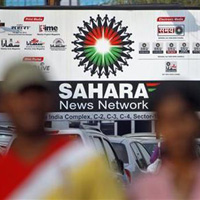 08 November, 2014
Print this article Font size -16+
The Securities Appellate Tribunal on Saturday, 13 April, adjourned to April 20 its hearing on Subrata Roy's plea against market regulator Sebi's attachment order of his bank accounts and other assets, along with those of two group firms and their top executives.

After taking up the petition for its "preliminary hearing", the Securities Appellate Tribunal (SAT) posted the matter to April 20 as the counsel for Sahara Group sought adjournment due to medical reasons.

The matter relates to the case involving a refund of over Rs 24,000 crore raised through "various illegalities" by two Sahara companies.

The petitions have challenged Sebi's February 13 order attaching bank accounts, investments and other assets of the two companies and their four top executives, including Roy, to eventually sell them for recovering required funds for the investor refund as per a Supreme Court order.

Roy had first approached SAT against Sebi's attachment orders in February, followed by pleas filed by other entities.

The Tribunal last heard the matter on March 26, when it decided to proceed further on all the petitions together.

Incidentally, Sebi passed another order in this case on March 26, hours after SAT's last hearing of Sahara plea.

In its March 26 order, Sebi summoned Roy and three other top executives for personal appearance on April 10 after submitting details of their personal and company assets to ascertain terms for the sale of those assets.

Roy and others appeared before Sebi's whole-time member Prashant Saran at the market regulator's headquarters here on April 10, wherein they were asked about their asset details.

As per a Supreme Court order, Sebi has been asked to facilitate the refund of more than Rs 24,000 crore to over three crore bondholders after verifying their genuineness.

After expiry of the court-set deadline for the refund, Sebi had issued attachment orders.

Sahara has questioned Sebi's action for attaching Roy's property, saying that neither he was issued a show-cause notice nor did Sebi follow procedure of securing an enabling order from a judicial magistrate.

Countering Sahara's claims, Sebi has sought dismissal of the plea, saying that the Supreme Court order in the case was self-explanatory and executive in nature and Saharas had been given many occasions to present their case.

In the meantime, Sebi has also approached the Supreme Court seeking orders for detention of Subrata Roy and this plea will come up for hearing later this month.