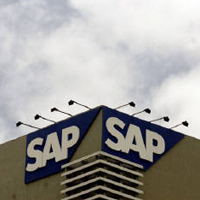 DZ Bank analyst Oliver Finger said the figures were "quite disappointing", adding that growth of software and software related service revenue was relatively weak in Germany and that cost measures were higher than expected, hitting the operating margin.

The company reiterated key non-IFRS software and software-related service (SSRS) revenue, which includes revenue from license sales and maintenance services, was expected to rise 10-14 per cent this year at constant currencies.

It also reiterated full year operating profit is expected to be in a range of 4.45-4.65 billion euros and operating margin was expected to rise by 0.5-1.0 percentage points.

Co-CEO Jim Hagemann Snabe told Reuters Insider that the company was focused on organic growth not acquisiitons and that its outlook was backed by a strong pipeline and solid tech spending.

According to database StarMine, SAP trades at 16.9 times estimated 12-month forward earnings, a premium to rival Oracle, which is valued at 14.7 times.

Microsoft is also scheduled to publish earnings on Thursday.