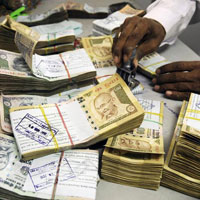 08 November, 2014
Print this article Font size -16+
Rupee rallied to its strongest level against the dollar since July 2013 on widespread hopes that exit polls later on Monday (12 May) would show the opposition Bharatiya Janata Party winning a majority in the country's elections.

The optimism comes even as exit polls in previous elections have proved to be unreliable.

India's five-week long elections are set to conclude on Monday, with exit polls from media organisations to be released starting after 6:30 p.m. Actual results will be out on Friday.