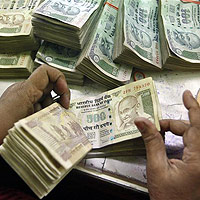 08 November, 2014
Print this article Font size -16+
The Indian rupee tanked 38 paise on Monday (29 September) to log nearly 7-month closing low of 61.53 against the Greenback following dollar demand from importers and some weakness in stocks ahead of the RBI policy review.

Sustained capital outflows also kept the rupee under pressure while some weakness in dollar overseas, which was trading down by 0.14 per cent against its major global rivals, was not able to stem the rupee fall, a forex dealer said.

At the Interbank Foreign Exchange (Forex) market, the domestic unit commenced lower at 61.35 a dollar from previous close of 61.15. It immediately touched a high of 61.31 on initial firmness in local equities.

In other Asian currencies, the dollar appreciated as well. The Japanese yen headed towards the 110 mark after US data showed the economy expanded at its fastest pace since 2011 during the April-June quarter.

The Indian equity benchmark Sensex today eased by 29.21 points, or 0.11 per cent. FIIs had pulled out USD 39.95 million last Friday as per Sebi data.

Pramit Brahmbhatt, CEO, Veracity Group said: "To start the week, rupee depreciated over half a per cent during the day. It tok cues from dollar which is trading strong. Also, the increased month-end dollar demand from oil importers forced rupee to trade low.

"Now all eyes are on the RBI policy review on Tuesday which will show the road ahead for the USD/INR pair. The trading range for the spot rupee is expected to be within 61.00 to 62.00."

On likely RBI policy outcome, Rakesh Goyal, Senior Vice-President, Bonanza Portfolio said: "We expect RBI will enhance system liquidity by further reducing SLR by another 25 bps to 21.75 per cent and also, further reduction in HTM ceiling to 23.5 per cent of NDTL. We also anticipate that RBI might ease daily CRR limit for banks 85-90 per cent."