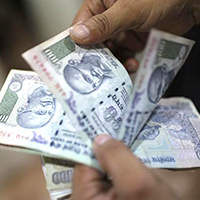 08 November, 2014
Print this article Font size -16+
The rupee rallied to a near one-month high, with stocks and bonds joining in, as hopes for a prolonged easy monetary policy in the US boosted emerging markets. However, traders said domestic concerns such as inflation and decade-low economic growth were likely to cap extended gains.

After hitting a series of record lows in August, the rupee has stabilised since Raghuram Rajan, the new Reserve Bank of India (RBI) governor, assumed office on 4 September and announced a series of measures to boost the battered currency.

Traders, however, said Monday's rally was only a knee-jerk reaction and markets would again start focusing on the domestic fundamentals soon, which would keep trade choppy heading into the central bank's monetary policy decision on Friday 20, September.

Prior to that, the Federal Reserve will announce its much awaited move on tapering monetary stimulus after its two day meet on Sept 17-18.

"We continue to expect that a Fed taper should pressure Asian FX in those countries in weak external positions, however the domestic policy responses will continue to colour the degree of reaction," Sacha Tihanyi, senior currency strategist at Scotiabank, wrote in a note.

The benchmark 10-year bond yield was trading down 7 basis points at 8.42 per cent.

News that Lawrence Summers had dropped from the race to head the Federal Reserve promised to prolong the lifetime of super-easy money, hurting the US dollar while bonds and shares across Asia rallied. The benchmark domestic share index gained over 1.5 per cent in line with other markets.

HSBC downgraded Indian shares to "underweight" from "neutral" on Monday, citing the recent rally and downside risks to growth. The bank said that after the recent bounce, India looks relatively expensive and is most exposed to growth adjustments.

The government is due to release the August headline inflation data around noon which will be the last key data point ahead of Friday's central bank policy review.

Raghuram Rajan will have to confront what may well prove to be his biggest challenge in his short time in office as he announces his first monetary policy decision.

Wholesale price-based inflation likely edged up to a six-month high, driven by higher food prices and a battered rupee, a Reuters poll found.

A reading above 6 per cent would hurt bonds and the rupee, traders said.

New Delhi is contemplating a near 10 per cent hike in diesel prices soon to ease its oil subsidy burden, government officials have told Reuters. A fuel price hike would further add to inflation concerns.