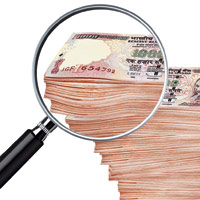 08 November, 2014
Print this article Font size -16+
Unless the rupee settles down, you can kiss all hopes of a further cut in key rates from Mint Road goodbye. Mid-June, the rupee continued its southern sojourn to hit a life-low of 60 to the US dollar after Federal Reserve chairman Ben Bernanke said the central bank would start to wind down its assets purchase programme by mid-2014. In effect, what it means is there will be much less by way of liquidity to go around globally — the Fed’s asset purchases top $85 billion a month.
In hindsight, it looks as if the Reserve Bank of India (RBI) had sensed such a scenario and decided to keep the cash reserve ratio unchanged at 4 per cent, and the repo rate at 7.25 per cent. A rate cut in July was anyway off the table — inflation data for June will come in only in mid-July and is most likely to be higher — thanks to the impact of the recent fuel hikes and a weak rupee. The only silver lining so far on the external front is Fitch Ratings’s upgrade of India’s sovereign outlook to stable on 12 June.
— Raghu Mohan

Talking Heads
As PM Manmohan Singh prepares for his last official visit to the US as head of the UPA II government this September, the US industry is lobbying the Obama administration to drive a hard bargain. On 6 June, 16 US industry associations across sectors, from solar energy and IT to agro-pharma, sought Barack Obama’s intervention in ending India’s supposedly discriminatory policies “against a wide range of US exports”, which are putting at risk
growing bilateral trade relationship. It is currently worth over $60 billion. They wanted the US government to initiate official talks, along with the EU and other like-minded economies, and respond “purposefully, using all available trade tools and diplomatic engagement”. Singh, expected to attend a UN General Assembly session in September, should make use of every opportunity to meet Obama. But he would do well to stay away from commitments that the new government — after the 2014 polls — may find difficult to fulfil.
— Joe C. Mathew
Not A True Measure Of Mass Appeal?
Bloomberg TV is the latest channel to say that it’s stopping subscription for TAM Media’s TV Viewership Ratings (TVR). Others who’ve pulled the plug are Multi Screen Media (owners of the Sony channels), NDTV and the Times Group. Bloomberg TV complained that TAM’s audience numbers are based on residence meters, while most of its viewership is in offices. Others say TAM’s sample size is too small. As the chorus rises among broadcasters for an end to TVRs, the ad industry is being cautious, saying that without audience ratings, making a media plan is difficult.

With the Broadcasters Audience Research Council alternative nowhere in sight,  TAM Media, which has seen
similar challenges in the past, is quite confident of riding this through.
— Gurbir Singh
Reviving The Debt Market
India’s top three exchanges, the National Stock Exchange (NSE), MCX-SX and Bombay Stock Exchange (BSE), have finally risen to the challenge of reviving the undernourished Indian corporate debt market. They were given this charge by the finance ministry, Reserve Bank of India and Securities and Exchange Board of India, after the failure of numerous committees and financial institutions. The NSE and MCX-SX have already rolled out their debt trading platforms, while the BSE will launch one soon. But will this resurrect the quiescent debt market? The road is long and hard, say experts. The exchanges will have to do a lot more than just launch a snazzy trading platform. They will have to first standardise bond issuances on the basis of tenure, schedule of payments, etc.; bring smaller issuers, who prefer one-on-one private placements, on board; and streamline their quotes by listing bond prices and accrued interest separately. Also, retail investors will only bite if lot sizes — now about Rs 5 crore a lot ­— become far smaller.
— Shailesh Menon
Truly A Grand ‘Old’ Party
At a time when Congress vice-president Rahul Gandhi is projecting himself as the flagbearer of the youth brigade
in the grand old party, the PM and UPA president have done a huge disservice to the idea by sending out a contrary signal in the latest reshuffle. Seven of the eight new ministers in the Cabinet are above 65, way higher than the government-prescribed retirement age: Sis Ram Ola (85), Manikrao Gavit (78), Oscar Fernandes (72), K.S. Rao (69), Santosh Choudhary (69), Girija Vyas (67), E.M.S. Natchiappan (65). J.D. Seelam is the youngest at 59 years. By bringing back old faces repeatedly into the Cabinet, the UPA II is yet again signalling that it puts loyalty and sycophancy above young blood and fresh ideas. And that’s clearly out of sync with its newest vice-president.
— Rajeev Dubey

A Sudden Allergic Reaction
Ranbaxy Industries is in need of a shot in the arm. Ever since it pleaded guilty to ‘felony charges’ for violating manufacturing norms and agreed to pay $500 million as penalty to the US drug regulator, India’s largest drug maker has been at the receiving end of much censure.
Mumbai’s Jaslok Hospital and the Apollo group issued ‘cautionary advisories’ at their hospitals and pharmacies against Ranbaxy drugs. A public interest litigation was also filed in the Supreme Court accusing the company of selling substandard drugs and calling for punishing the executives concerned. The petition was rejected for lack of evidence. Ranbaxy made statements defending the quality of its drugs.
What is interesting is not so much the industry reaction, as the timing. It was common knowledge since 2004 that two of Ranbaxy’s drug manufacturing units — at Paonta Sahib and Dewas — were under the US Food and Drug Administration’s (FDA) scanner for quality issues. The matter has been in court since 2008 and, last year, the firm had set aside $500 million to pay damages.

Even the FDA has given clearance to drugs from its other units. Then why this sudden anti-Ranbaxy campaign?
— P.B. Jayakumar
Time For On-tap Bank Licences
As the 1 July deadline for hopefuls applying for banking licences in India nears, the industry is debating whether
bank licences should be issued on tap — every few years if the Reserve Bank of India (RBI) finds enough eligible candidates. The practice so far has been to issue them in batches: 11 were issue in the first round in 1993, and just two in 2003. From the first lot, only five survived; the rest fell by the wayside or reside in the belly of others. Two decades into banking reforms, the entry of new players has led to a stiff fight for market share, but the numbers are skewed. India is largely an under-banked nation, and RBI data says that state-run banks account for 52 per cent of deposits; the share of new and old private banks, foreign banks and regional rural banks in deposits is 13.6 per cent and 4.8 per cent, 4.3 per cent and 2.9 per cent, respectively. If you take credit, it is 50.9 per cent for state-run banks, followed by new private banks at 14.7 per cent, and old private banks at 4.9 per cent. Going by this, it seems that the time for on-tap licensing has come. ­
— Raghu Mohan
Multiple Cars, One Platform: A High-risk Strategy?
Auto manufacturers such as Volkswagen, Nissan and Renault may have touted shared platforms for multiple models as the best thing to happen to the auto industry in a long time. However, over the past year alone, more than 37,000 cars, including Renault’s Pulse and Scala, and Nissan’s Micra and Sunny, have been recalled — all manufactured on a common-platform, multiple-model strategy. The concept, as a ‘brilliant’ cost-reduction strategy, finds strong resonance among carmakers across the world. Amid all the positivity, auto analysts throw in a word of caution, saying that the risk inherent in this strategy is that even a small glitch can lead to global recalls and massive losses — across models. And, going by the growing numbers of cars currently being recalled across the globe by Toyota, Nissan, etc., the danger seems very real.
— Swati Garg
Gridlock In PPAs Raises Concerns
The centre’s nod to allow power producers to pass on costs of imported coal to customers is likely to provide them some relief. But the wariness of power distribution companies (discoms), even after the Centre’s financial restructuring scheme, to announce any long-term power purchasing bids continues to be a dampener. This has resulted in the industry witnessing a dearth of new power purchase agreements (PPA). In the absence of any new bids by discoms, the power producers will be forced to rein in their capacity-addition plans. The last major PPA was signed in December by Maharashtra State Electricity Distribution Co. with Adani Power and Indiabulls — after a gap of 18 months. “The demand growth is expected to be tepid at 6.2 per cent compound annual growth rate between 2012-13 and 2016-17”, even after an increase in capacity over the 11th Five-Year Plan, says Prasad Koparkar, senior director, industry and customised research, Crisil Research.
— Chhavi Tyagi
Less Talk, More Action
Just when you thought that the government had set up a committee to study just about everything it wanted advice on, the finance ministry has announced a standing committee to study the competitiveness of India’s financial sector and to suggest reforms thereunder. There is indeed much scope for reform in the financial sector — such
as creating a robust debt market and introducing hedge funds — but coming after nine years of the UPA taking the reins, sceptics wonder if it will lead to concrete steps. What will the committee solve, is a question. But at least, “it brings on the table critical questions”, says Nitin Potdar, partner at J. Sagar Associates. India stood at No. 59 in the Global Competitiveness Report 2012-13 by the World Economic Forum, well behind China, Brazil and even Mexico. The report also says that adjusted for sustainability in competitiveness, India’s points go even lower. Time for more than just committees, one would say.
— Abraham C. Mathews
It’s All In The Name
Can a mere name change be one of the solutions to India’s coal mining troubles? Madhya Pradesh’s coal mining firms have cited delayed environmental clearances and community agitations as reasons for the late development of mines. But with the MP State Biodiversity Board’s demand to declare the mineral a ‘biological resource’, at least opposition from local communities may be tackled. This is because mining of any bio-resource requires firms to pay 2 per cent of their annual turnover to local panchayats in addition to the royalty paid as a one-time compensation. MP is India’s fifth largest coal-bearing state, with reserves of 24 billion tonnes. Though the categorisation as a bio-resource has been rubbished by miners and is seen as a double-taxation tool, some feel it is justified and could pave the way for inclusive profit sharing and reducing conflicts. The matter is with the National Green Tribunal.
— Moyna
The Price Is Right
After years in the wilderness, Ford India is beginning to focus. It will neither wander into the ‘A’ nor the ‘C’ segments. It recently announced the launch of eight cars by the end of the decade — all in the Rs 5-13 lakh category, or the ‘B’ segment. So far, it’s only released the Fiesta, and will launch the EcoSport soon. Ford anticipates a huge surge in B-segment buyers in the coming years, piggybacking on an expected rise in income and jobs, contrary to the current economic and employment scenario. With an average sale of 2.1 million vehicles in four years, Ford believes that its ‘B’ platform could add 13 top hats in the long run, adding to its current annual sales of 80,000 vehicles.
— Vishal Krishna