Rupee Down 9 Paise Against Dollar In Early Trade 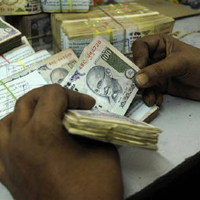 08 November, 2014
Print this article Font size -16+
The rupee on Thursday (12 June) depreciated by 9 paise to 59.36 against the dollar in early trade on the Interbank Foreign Exchange market.

Dealers said the US dollar strengthened against the rupee in line with its gains against other Asian currencies.

However, early gains in stock markets capped rupee's losses against the American currency, they added.

The rupee had snapped its two days of losses and edged up by two paise to close at 59.27 against the dollar following late selling of the US currency by exporters Wednesday.